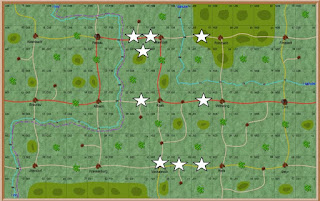 Battles fought in the Linz Campaign

The Linz campaign has come to an abrupt, and rather unexpected, end with a French victory.  It is a natural end to the campaign, but it came a little earlier than I expected.

The campaign ran very smoothly and produced nine wargames for Jan and I to fight.   Most were unusual, all were very enjoyable.  None were the sort we would have planned for ourselves.  Sometime the odds were very uneven, and the result certain.   Most arrived on the table in an order of march I would not have selected.   Reserves were often not very well placed to support the battle.  But all of this led to different and challenging wargames.  And that is the whole aim of the campaign.

So a successful campaign.  And a fitting end to our 1813 campaign, which has run for four years.

Work on the 1814 campaign is almost complete.  I had hoped that the 1813 campaign would run for another two weeks, and the next one would then have been ready to start.

The next campaign is much more ambitious in size and content.   It will include six different campaign areas all running at the same time.  There are twelve command posts, and each one is an army commander with four corps under command.

I have started a new blog for the campaign.  So far it includes an introduction, details of the allied plan and a map of the initial campaign areas.   Next week I hope to post detailed maps of each campaign area and photographs of each of the twelve armies.   You can find the blog here

Recruiting commanders is going well.  I asked for volunteers last week and have filled eight of the twelve posts.  I can start without the full twelve commanders, but it would be better if I could fill them all.  If you would like to take part you would be very welcome.  No previous experience is required.  The initial commitment is for about three months and during that time you would have to write orders once a week.