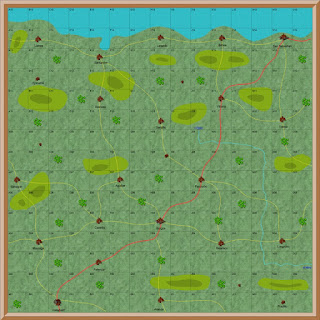 As expected the tactical map proved much more difficult than the strategic one.

This was my first attempt.   I tried to achieve the same sort of road system as the strategic map, but making allowance for my modular wargames terrain.   It is close enough to what I want, but when I started entering the terrain reference numbers I quickly found that I did not have sufficient terrain blocks of the correct type.  I could not make the road system work with my present limited number of terrain blocks.

My terrain works best with a town in the centre of the wargames table and roads radiating out from the centre.  The terrain has been designed so that a few boards, 21 in total, can give a wide variety of battlefields.   But it all depends on each road leaving from the centre of one side of the board.   This does not allow the more natural road system which I was trying to achieve.

It also raised problems which I had not anticipated.   My campaign rules are based on a town every three squares, or 45 miles, and the whole resupply system depends on this.   I would have been prepared to change the rules, but I was not prepared to make a whole new set of terrain boards. 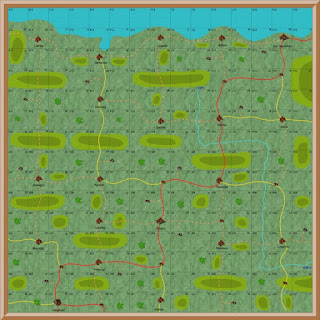 At first sight this looks very similar to my current campaign maps, and indeed it is.  But there are some important changes.

First every town does not have a road running north, south, east and west.   Nor are all towns in the centre of the 9 squares which becomes the wargames table.   And finally the dotted lines represent tracks.    This will allow me to introduce different march rates on roads, tracks, cross country or difficult terrain.   It will also present the campaign players with typical tactical and supply problems encountered by both sides in Spain.

So an improvement on my current campaign maps, but far short of what I was hoping to achieve.   I have not given up yet.  I may be able to fine tune it a little.  But I will not be able to achieve the look that I was looking for.

On the other hand my current map system has proved its worth over four years of non stop campaign movement.   There has not been a single complaint from any of the PBEM players that the table top terrain was not what they expected from the campaign map.   Setting up a wargame takes just minutes, and it’s simple to extend the table to the north, south, east or west should the flow of battle require it.

But it would have been nice to have prettier maps.