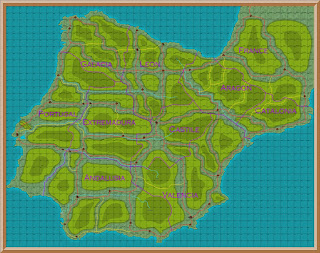 High summer in southern Spain is a good time to find a cool room with a cool drink and avoid too much physical activity.   So it’s a great time to work on a new map.

I mentioned a few weeks ago that I was working on a new map of Italy for my proposed Campaigns of Napoleon project.   I wanted to make them more like Malcolm McCallum’s excellent campaign maps murat.ca/maps.htm

The unexpected surrender of the 2nd French corps in my PBEM Gera campaign put this project on the back burner.  It suddenly seemed likely that I would have to start the next phase of my 1813 campaign, which will be based in Spain.   I already had the maps ready, see above, but they were my old modular system where all towns were in the middle of the square and all roads entered and left in the centre of the square.

I still want to be able to transfer them to my modular wargames table, and this is where the real problem arises.   The roads on Malcolm’s map follow a much more realistic course, but this would not convert to my wargames table.

I am determined to try to find a solution, but first I had to make a new strategic map of Spain.   There would still be the 20 mile grid square, which would translate on the tactical map to one wargames table.  But the towns would not all be in the centre of the square, and the roads would not all enter and leave in the centre of one of the four sides.

I already have photo copies of Malcolm’s map of Spain.  I drew a grid using his own border markings.   Each of these would now be one of my map squares, and each would convert to a wargame table. 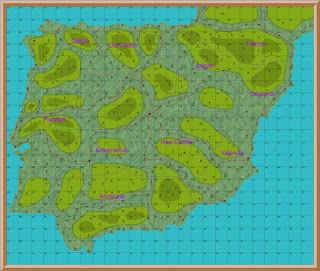 This is my first attempt, and I am quite pleased with it.   The roads look more natural, as does the location of the towns.   And there is much less terrain than on my earlier map.

Next comes the difficult part.   I now need to make a tactical map ready for the next campaign.  The campaign area will be from Valladolid to Burgos, and will cover an area five by five squares on the strategic map.  But there will be three by three squares on the tactical map for each one on the strategic map.   And though the roads will not enter and leave in the centre of the square, they will have to be capable of transferring to the wargames table using my limited number of scenic squares.  And of course all roads on those squares to enter and leave in the middle of the square.

That’s next week’s problem.  Not sure I can solve it.  But it does keep me cool during these hot high summer months.