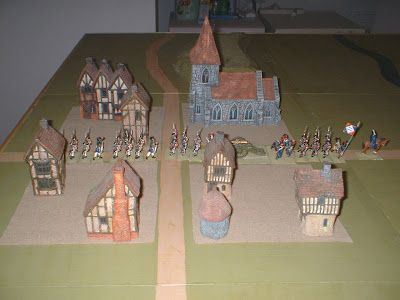 PBEM battles seem to be like buses - you wait a long time and then two come along together.

The campaign has now reached the stage where it is all going to happen pretty soon, at least in campaign time. Both armies are within striking distance of each other, and both are spoiling for a fight.

At present two battles have started at the same time, which could well cause a problem in how to fight them. Because each corps commander writes new orders three times a day, and each battle is likely to take up to a day to complete, I have yet to figure out how to complete one battle with reinforcements, and then fight the second one.

As has happened in the past with wagames rules, once I solve one problem in the campaign I seem to create a second one. But worse still the battles that the campaign produce are not proving to be very good wargames. This is the old campaign problem that no one wants to fight an even battle, everyone wants to gain an advantage over the enemy. This is a perfectly reasonable objective, but it does not lend to a good balanced wargame. If one side gains a two to one advantage there is really no point in even fighting the wargame - its bound to go to the one with the larger army.

Its taken me years to design my solo campaign, which works very well and provides excellent wargames. I had hoped that I could convert it to a multi player PBEM campaign, but its simply not working.

When this campaign ends I will have to go back to the drawing board and see what I can design. I am reluctant to abandon the idea of a PBEM campaign, as it has provided a lot of enjoyment. But I do miss being able to "master mind" the campaign moves to provide challenging wargames.

You can read the latest wargeme, the battle of Halle, here: