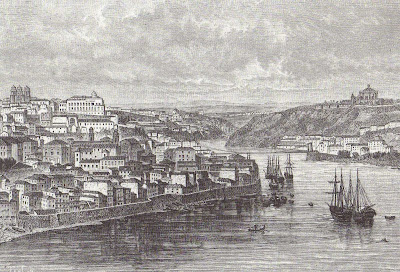 
Oporto was the last of 11 battlefields which we visited during our second visit to Portugal and Spain to walk Wellington's battlefields. We started at Torres Vedras, then Rolica and Vimerio. Busaco was followed by Poco Vehlo and Fuentes de Orono. Then Cuidad Rodrigo, Fort Conception, Almeida and The Coa.

After so much time spent walking deserted battlefields, Oporto was a real challenge. Indeed even finding the hotel was a real challenge. We speak no Portuguese and entered Oporto on a different road than the one we planned, so no surprise that we got lost. A good hour was spent driving from road junction to road junction, jumping out to show the nearest pedesterian the name of the hotel written on a scrap of paper, then following their directions to the next junction. Only when we passed the same square twice did we park the car and set out on foot. Then we discovered that the hotel was in the middle of a pedestrian only zone!!

You can read about Oporto, and the other 10 battlefields, at: