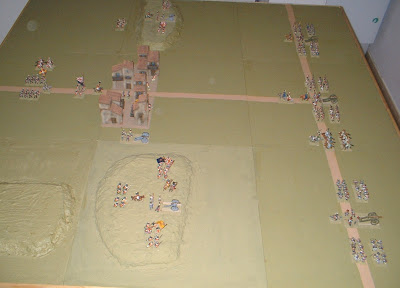 Starting positions for the battle of Vimerio


Its been a very frustrating week. All of my efforts have gone into setting up the new PBEM Halle campaign and getting it started. Our wargaming has been put on hold and we are both missing it.

Jan and I will wargame any battles which need to be fought for the PBEM campaign, and we need to be able to wargame them quite quickly to avoid holding the campaign up. However we anticipated that there would be periods when there was a lot of campaign movement, but no fighting. So I came up with the idea of fighting Wellington's Battles to give us an ongoing wargame to fight.

Last Wednesday I set up Vimerio, which was to be the second in the Wellington's Battles series. For various reasons we were unable to get started on the game before the weekend, but expected we could start it on Saturday and finish Sunday.

On Friday the campaign movement resulted in two cavalry contacts. This involves four players, and each had to confirm what they wanted to do before I could proceed with the campaign. Unfortunately they live all over the world, so time zones (not to mention real life) get in the way. By Saturday I had three replies, but had to wait until Monday for the fourth. What the players decided could easily result in a campaign battle, so Jan and I could not start Vimerio until I received the fourth reply. And it could have arrived at any time.

So no wargame over the weekend. Today I got a reply, but one which requires clarification. So another wait. Meanwhile the table (see above) sits there waiting for us. Tonight I expect confirmation about the campaign.

However we have a busy few days coming up, and are not likely to be able to start either Vimerio or a campaign game.

I wanted to open my 1813 campaign to PBEM, so I can't really complain. Indeed I am really enjoying the experience, but I do miss the days when we could set up a game whenever we liked and play for as long as we liked.