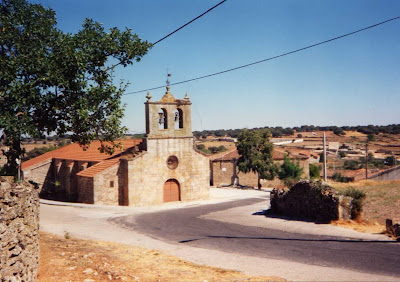 In 1994 Jan and I paid our second visit to Fuentes de Onoro. Our first visit was three years earlier with Holts Battlefield Tours. This is one of those places you really want to be able to explore on your own. To stop and ponder and soak up the atmosphere. Like most Spanish villages it was deserted during both of our visits, and this just adds to the character of the place.

You can read about both of our visits by clicking on Walking Napoleonic Battlefields on the right, and then looking down the list of labels until you find Fuentes.

I have been a little late publishing the battlefields blog this week, because I have been trying to move it to a new blog. This whole blog business has taken on a life of its own since I started earlier this year. First I had just the one blog, this one. I soon found that I was running out of space, so I opened a new one for our move to Spain and our life here since then. In particular it has photos of our regular hill walking in this beautiful area. Not long ago I found I was still running out of space, so I opened a new blog for the campaign, both solo and PBEM. There are a lot of photographs of the wargames, so I need the extra capacity. Now I find that the battlefields blog is the problem. We are less than half way through the battlefield visits I want to cover, and already this blog is 75% full.

I have opened a new blog dedicated to the battlefield visits. I plan to reorganise the ones I have done already, to make them easier to find. But I am having trouble "googling" the blog. Not much point in opening a new one if no one can find it. Providing I can sort this problem out I will post details of the new link here shortly.