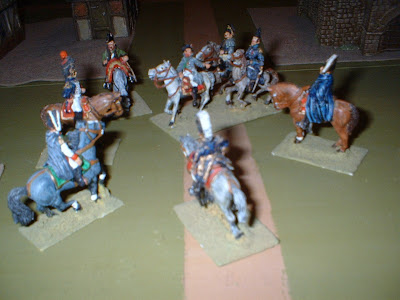 This was designed to stop corps commanders reacting to something which happened in another part of the wargames table, and which he would not be able to do in real life. When this rule was adopted we normally fought larger wargames with four corps on the table.

Over recent months we have been fighting much smaller games, often with only one corps on the table. In these circumstances the corps commander had to be able to change his orders, and was allowed to do so for the use of one to three pips. A Gifted commander would require one pip, an Average one two pips and a Poor one three pips.

If the commander in chief is present during the battle he can still use his pips to change corps orders, thus allowing the corps commander to use all of his pips to fight his corps.

I have now amended the rules to show this amendment. The pages concerned are 2, 3 and 4.
Posted by thistlebarrow at 17:34