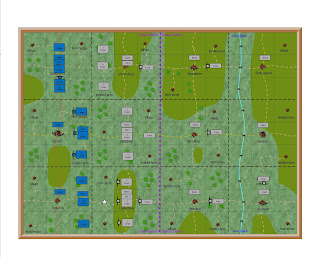 In the north both armies rest and reorganise

In the centre French retreat to Goslar

In the south Prussians attack Osterode 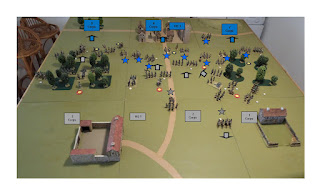 However they held their centre back

This proved a mistake, because the Prussians could outflank the woods

The Prussians lost the first cavalry melee on their right

This forced them to hold back their attack on the woods

Only when the French started to retreat did 1st corps advance

On the opposite flank they had more success

Here the cavalry melee was a draw, and both brigades withdrew

Fighting continued until nightfall, but the French suffered more casualties

The Main attack was in the centre.

Supported by 2nd corps he managed to break the French centre

Despite having the Imperial Garde and Napoleon in command

This game was decided within two moves

The French had woods on both flanks, with open ground in the centre

They could deploy behind the woods, half way in or hold the whole woods

They decided on the latter, but left their centre where it started the game

The woods are a strong point, but they are difficult to defend

Prussian artillery could approach within short range of the woods

They could then blast the forward infantry brigade in the woods

To counter this the French cavalry had to be brought forward

As always the initiative is with the attacker

He can take advantage of any deployment error

The commander can also take brigades from the three corps

This strong reserve can then be directed at the weak part of the defence.

During this campaign I have usually been the attacker

This is because Jan prefers to react

He must advance into artillery range of the defender, and in doing so accept first fire

If he loses either cavalry or artillery, it becomes almost impossible to attack.

He has two or three moves to fire on the enemy

This will usually result in an early cavalry melee

Cavalry melee will usually result in both sides taking casualties

This will weaken both brigades, who then usually retreat behind the infantry

If the defender wins the cavalry melee it will be very difficult for the attacking infantry to advance.

The attacker will usually win at least one melee

He can then use his reserve to support the winning side

This makes for an interesting wargame

The attacker must hold his reserve in the centre

From here he can support whichever wing wins the cavalry melee

But by holding the objective he has won the game.

This should result in a second day of battle

But that is usually a very boring wargame

The stronger attacker can redeploy overnight

I usually avoid this outcome by having the weaker defender retreat overnight.