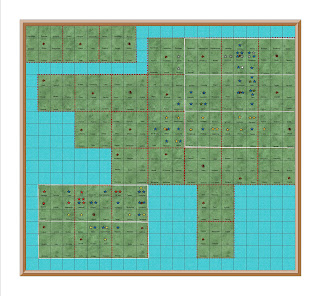 The location of each phase is shown on the map above, the colour indicating which side won.

There have been six revisions of the campaign since then, and each one resulting in new maps

Consequently many areas have been fought over more than once.

This is the current map, showing the military regions throughout Europe.

Goslar is the white star in northern Germany.

This is not as difficult as it may sound, because there are lessons to be learnt from each phase 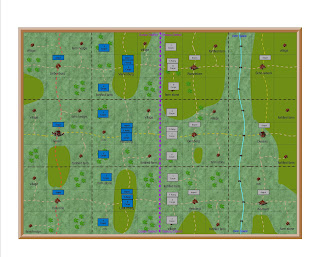 Each side is now an army group of three armies

Each army has three corps.

This is an increase of three corps per side.

It will result in much larger battles, and more crowded wargame tables

Previously, with two corps per army, there was a large gap on the wargames table

It will also allow the CinC to create a larger reserve of artillery, cavalry or infantry.

In theory this should result in more interesting wargames, which is the aim of the campaign

But I will reserve judgement until I have play tested a couple of campaign phases.

It will also mean a reorganisation of the supply system.

In my earlier campaign phases most battles had only one, or possibly two, corps per side

Each corps starts the campaign with four days supplies, with one more day in each town held

With six corps, and six towns on each side, this worked well

But with nine corps per side, and still only six towns, it does not

The new supply system will remain the same.

Corps must still be within one days march to receive supplies.

But a more complicated supply distribution system will be required.

Except in Spain, the garrison will no longer be shown on the campaign map

Nor will they take part in any wargame involving a town, unless I introduce sieges.

The Prussians (right) are concentrated on the border to attack.

Each army has a campaign area three squares by twelve squares

Each army has two towns to supply three corps

It sounds quite complicated even before the campaign starts

Or when a large supply is lost when a town is taken and the enemy secure the supplies there.

Once more it all works in theory, but game play will soon highlight any problems.