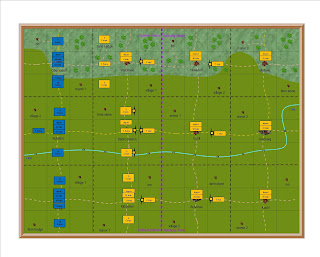 Schwarzenberg has four of his six corps out of supply

Schwarzenberg blinked first – but he really didn’t have any choice.

Both armies are shattered and in practical terms no longer operational.

The Bavarian/Baden army has lost more casualties, but are fully supplied

The Austrian army has suffered less, but still considerable, casualties

1st and 2nd Austrian armies are completely out of supply

At that stage they must immediately retreat until they can resupply

3rd army is fully supplied, but being south of the river Inn is too far away to help

2nd army had to retreat to Sankt Johann due to attrition.

However this is only the start

Schwarzenberg deserved to win this campaign.

He has more operational brigades than Massena.

But no commander can ignore such a dire supply situation