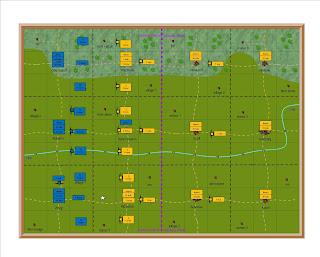 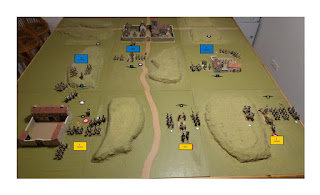 Both armies lost heavy casualties during this hard fought battle

The French moved forward to attack, rather than wait for the Austrians to do so

The Austrians held their ground, and repulsed the French]

For some time our wargames have involved the defending side deploying either side of the town, with the commander taking a couple of elite brigades from each corps to reinforce the town.   The attacking army would also create an elite attack force in the middle, often including the artillery from at least one of the corps, and would attack the town.

This was driven by the campaign supply rules.  This required each corps to stay within supply distance of its main supply town.   This was usually the one behind the town being attacked.  To build up the forward towns as the main supply base risked losing everything if they lost the battle.

However the result was really a wargame consisting of a short siege followed by the storm of the town.   This game was a deliberate attempt to move away from this model.

Worgl is one of the three most westerly towns in the campaign, so there was not a town further east to become the main supply base for 3rd army.   It is also just one days march south of Kufstein, which is the main supply base for the whole French army of central Europe.   So the defending French army could be deployed in front of Worgl, and one of the two corps would still be within one day’s march of Kufstein.

You will see from photo 2 above how this looked on the wargames table.   The French are deployed in the three centre squares.   Worgl is behind the centre of the French position, and is held by two militia brigades.   The Austrians started the game off table at the bottom of the photo, but entered the table at the start of move one.

Jan (who commanded the French army) decided to attack the Austrians as they entered the t able.   This was not in my original plan, but it did add an interesting edge to the game.   The result was a very hard fought battle, and one in which neither side could use their artillery effectively.   This photo is taken at the end of move two, and already a cavalry melee has been fought.   This is because both armies are moving towards each other.

The result was a short, but very hard fought, wargame.   It finished at the end of move 8 (out of a possible 12 moves.  By then most brigades of both brigades were in rout, or very close to doing so.   This is partly because they all started the game with casualties from earlier battles, but also because there was a lot of close combat fighting very early in the game.

I enjoyed it, and it has prompted me to consider changing the orders of battle.   At present there are two corps in each army, who deploy across three scenic squares on the table.  This was done to create a lot of space to manoeuvre.  But it resulted in both armies having to create a “reserve” under command of the CinC.  I am looking at the option of increasing to three the number of corps in each army.  This would allow one corps to deploy in each of the three scenic squares.  It would also allow the commander to create a real reserve to reinforce any breakthrough or concentrate elite troops to create the breakthrough.   This is all at the planning stage at present, but is looking very likely.   It is likely to be introduced for the next campaign phase to see how it works on the table.