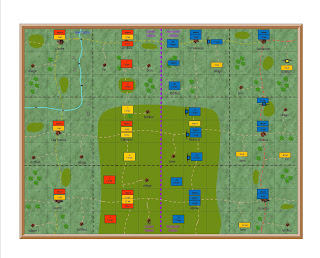 Soult has redeployed his army to the Santander border

Wellington has redeployed his army to the Llanes border

After nine days both armies are effectively in the same positions as when they started the campaign.   The French hold the Santander side of the border, the British the Llanes side.

Both armies have suffered considerable battle casualties, even taking into account reinforcements received.   Both are weary and in desperate need of rest and reorganisation.

Wellington’s army are however well supplied.   Four of his corps have the maximum of four days supplies, the other two have three days supplies.   All of his depots hold sufficient supplies to ensure that his army does not go hungry.

Soult’s supply situation is desperate.   Two of his corps have a respectable three days supplies, but the other four have only one day’s supplies.   Worst still all of his depots, except for Santander, have insufficient supplies to do more than maintain this situation.   Santander has 14 days supplies, but is surrounded by guerrilla bands and unable to secure convoys to the front line depots.

The French have completely failed in their campaign objective of taking and holding Llanes.   Indeed they have only just been able to secure the Llanes/Santander border.   They will have to send one corps from each army to secure their lines of supply and move forward  the necessary supplies from Santander.  This task will take weeks rather than days.

Wellington is the clear winner of the campaign.