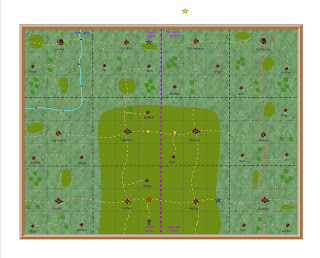 This was a very frustrating campaign for the French player, which was me.

It was not so much the outcome of the five wargames, as the French won two of them.   It was more the unrelenting good luck of the Spanish, both regular and guerrilla.   They even won the first game of the campaign, even though the odds were very much against them.   The French attack on Cabezon was a surprise, and the Spanish were not concentrated.  Yet they managed to hold the French and win the day.

The Spanish army which formed part of Wellington’s Army of the North is by far the best of the four in Spain.   This was deliberate because they form a third of Wellington’s army, and have to be able to hold their own against the three French armies in the north of Spain.   This is achieved by improving their combat and morale to the equal of the worse of the three French armies.   It is then down to the Spanish player, usually Jan, and the luck of the dice.   Over the years I have experimented with grading the Spanish armies.   At present they are slightly better than previously.   But I don’t think that is the reason for Wellington winning this campaign.

Once more it came down to the guerrilla activity and the effect on the French supply system.   All guerrilla combat is off table.  I have never enjoyed skirmish Wargaming, though I have tried it a few times over the years.   So any guerrilla attacks on either garrisons or convoys is decided by the rules and a dice roll.   The rules give the French a decided advantage, and the guerrilla need a high dice roll to inflict any damage.   However when they do it can have long lasting and serious damage to the French.   The worse that they can do is capture a convoy or a garrison.   If they do so they deprive the French of the supplies involved, usually 2 to 4 days.   These are replaced the next day at the main French depot, but it can take days to redistribute them to the forward depots where they are required.   This in turn can delay the French corp(s) concerned in returning to full combat condition.

When a battle if fought both corps go through a three day recovery period.   On the next day the loser retreats, the winner occupies the town captured and takes possession of any stores held there.   On the next day both rally, regroup and resupply.   They can only do so if they are in supply and not in contact with the enemy.   All routed and shaken brigades become formed again.   Regroup means that Infantry casualties are concentrated in the brigade with the most casualties, but all corps affected keep at least 10%. Resupply is only possible if the corps is within one days march of a supply depot, and then it must have sufficient to bring the corps up to four days supplies.   If all of this is completed then all corps are ready to fight again on the third day

In this campaign the disruption of the French supply system by the guerrillas meant that there was not sufficient supplies in the nearest depots to the recovering French corps.   As a result they were not ready to resume operations on the third day.   This allowed the British/Spanish corps, who were always in supply, to dominate the campaign.   Even when the French did win a battle they were unable to exploit it due to lack of supplies.

I feel that all of this reflects the problems faced by the French armies in Spain and Portugal.   But it is still very frustrating trying to keep the campaign on the desired time table which should produce six battles within six or seven days.  This means we always have a wargame on the table, and the campaign is fast and unpredictable.

As always I enjoyed the campaign, but it was more frustrating to run than is usual