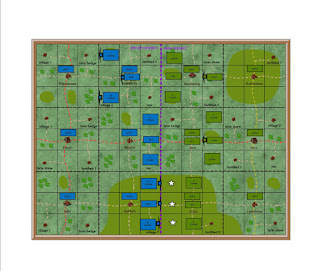 Both armies are nearing the end of their operational ability

Despite heavy fighting over the past 4 days, neither side has gained an advantage.

In the north French retreat to Sommerda, Russians regroup at Naumburg

In the centre Russians rally at Jena, French resupply at Weimar

In the south French attack Sulza 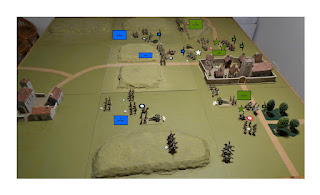 Both armies start the battle with considerable battle casualties

As attacker, this presents a difficult problem.

He creates a reserve of three infantry and one cavalry brigades

This will form the spearhead of his attack.

15th Vistula corps will support the attack in the south.

The Russian guns reply, but do little damage

The French reserve advance in the centre

The Vistula lancers move forward to threaten the enemy artillery

Russian Cossacks charge the lancers, but lose the melee and rout

One infantry brigade will hold Sulza until nightfall, and will then retreat to join the rest of the army

The French have suffered no casualties

The outcome of this battle was decided solely on morale

It also made it very likely that if one brigade were to rout, the supporting brigades might well join them

He then advanced his artillery to long range of the Russian infantry, who had to hold their ground to protect their guns

His intention was to weaken the infantry with artillery fire, and then attack with infantry and cavalry.

Only one Russian infantry brigade was hit, and it lost its morale and routed

The French infantry would now have to advance to take Sulza

This meant moving into range of the Russian gunners

Only the French reserve advanced, the two corps on the flanks held their ground

The Russian infantry brigade which had routed left one of the Russian batteries uncovered.

The Vistula lancers advanced to threaten these guns, and the supporting Cossack brigade counter charged

The Poles won the melee, and routed the Cossacks

A nearby Russian infantry brigade had to test their morale, failed and joined the Cossacks

The Russian gunners had to abandon their guns and seek shelter in a nearby infantry square.

As the result of one cavalry melee the Russian centre was broken, without a single French casualty

The Vistula lancers could not have charged the Russian infantry

Possibly lost casualties, cavalry melee should have resulted in a draw at best

French infantry would have had to march towards the guns

Would almost certainly have lost at least one infantry brigade

May well have lost more due to failure of morale.

Should have been a Russian victory

Turned out to be a French one