Review of the 1813 campaign 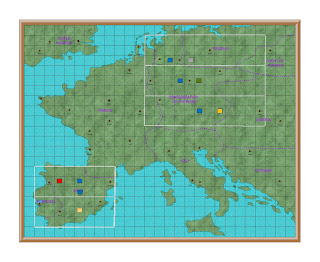 The end of a campaign phase is always a good time to review what went right and what went wrong, and how it could be improved.   It is also natural to review the history of the campaign, and how it has developed.

The campaign started in April 2009, with a hand drawn map of Europe and corps locations shown by using labels attached with blue tac.   This current, and much improved map, covers the same area as the original map.   It shows the same five campaign areas, each with a French and allied army.   In fact the concept has hardly changed at all during those twelve years. 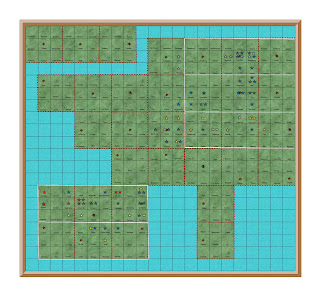 The original concept was a series of stand-alone mini campaigns, which I call campaign phases.   Each one would be similar in size and scope to the Waterloo campaign.  It would last five or six campaign days and would produce three or four battles to wargame.   Each phase would last about three months.      At the start of each phase both armies would be full strength and fully supplied.   This concept has not changed at all.  It is possibly the most important aspect of the campaign, because it allows a complete fresh start with each phase.

Over those twelve years there have been 78 campaign phases so far, and they have produced 393 battles to wargame.   I never anticipated that it would last so long, nor that it would provide pretty well all of our wargames.   It took about three months to design and create the campaign.  I wrote campaign and wargame rules to create the type of campaign and wargame that I wanted to play. The aim was to use all of my wargames figures and scenery in sequence.   For example the first phase was Franch v Prussian, then Franch v Russian and so on.

It has, of course, evolved over that time.  Had it not done so it would surely have folded many years ago?   At the end of each phase I considered how it could be improved, and in almost every case there was a change.  Usually a minor one such as supply or a wargame rule clarification.   However there were also six major changes, which are not to be confused with a new phase.  I call these Campaigns, not to be confused with Campaign Phase.   All are part of the same 1813 campaign.

First Campaign – April to October 2009.   This consisted of 3 phases and produced 15 battles.   It was a solo campaign, and was the real play test for the whole system

Second Campaign – October 2009 to July 2013.   This ran for 9 phases and produced 52 battles.   Each player commanded one corps within the campaign.   They wrote orders and Jan and I wargamed the resulting battles.

Third Campaign – July 2013 to March 2015.   This one had 27 phases and 138 battles.   When I got to the end of 1813 I decided to extend the campaign areas to include parts of France, and called it the 1814 Campaign.  I also redesigned the PBEM element.  Each player would command an army.  There would be ten players each commanding one French or Allied army.   This had the advantage that if one player packed in the campaign, I could take over his command until the end of the phase.

Fourth Campaign – March 2015 to January 2016.   This one had 14 phases and 58 battles.   Nearing the end of 1814 I had to decide whether to carry it forward into 1815.   I was already a little unhappy with my earlier decision to move into 1814.  I liked the historical story of the actual 1813 campaign, a sort of world war of the developed nations of the time.   And I particularly liked that all the armies were more equal than before or later.   The 1812 Russian campaign had destroyed Napoleons Grande Armee.   Furthermore the various allied commanders had learned hard lessons by losing battle after battle to the French.   So at the start of the 1813 campaign I could justify making Austrian, British, Prussian, Russian and even Spanish armies similar in combat efficiency to the French.   So I decided to turn back the campaign clock and start in January 1813.   This was also a PBEM campaign, but by now the player roles were finely tuned and no longer in need of review.

Fifth Campaign – January 2016 to May 2020.   This one had 21 phases and 110 battles.   Over the years the PBEM campaign had become increasingly frustrating.   There was a constant problem finding players to fill the ten command roles.   I also tired of having to chase players to send me their orders once a week.   Many of the players were dedicated, always sent their orders on time and obviously enjoyed the experience.   But a few “bad apples” completely spoilt my enjoyment of the campaign.   I was also tiring of the simple battles which usually resulted from inexperienced players.   So decided make it a Solo campaign again.   Jan enjoyed the wargames, but was not at all interested in the campaign administration.   So I would take on the dual role of umpire and commander.  To make it easier I would only play one phase at a time, rather than having all five areas running at the same time.   It required a complete overhaul of the administration, to introduce a hidden element of movement and supply.   However it would also allow me to produce much more interesting and complicated battles to wargame.

Sixth Campaign – June 2020 to date.   So far 4 phases and 20 battles.  This was the reorganisation of campaign maps to provide military regions and districts.  It was partly to overcome the difficulty of producing detailed maps of such a large area.  Where were the historical national borders?    Which rivers to use, which mountain ranges to include.   By creating a completely fictional Europe divided into military regions and districts, rather than historical nations, I could ignore most of the terrain features which had given me such a head ache in the past.

As I wrote the above I realised again just how complicated my campaign must seem to some of you.   You may find it hard to believe that to me it was a simple concept which developed naturally to meet challenges and problems as they arose.   Over the years I have played with the idea of a different wargame concept.  But I have never come up with anything which suits my wargame requirements so well.   And the fact that I am looking forward to my next campaign phase with such enthusiasm surely proves that for me at least I have got it right.