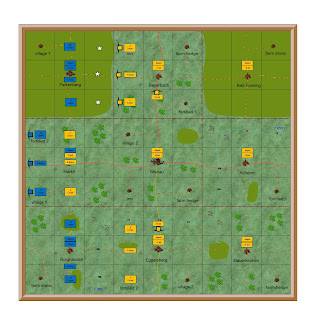 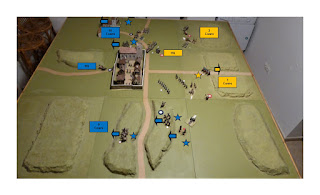 Battle of Falkenberg at end of move 11

The battle was decided by two separate cavalry melee, both won by the Austrians

At nightfall the Bavarians still held the town, but most of their corps was in rout

They abandoned the town under cover of darkness and retreated

The Bavarians occupied a very strong defensive position.   The walled town would be difficult to attack, and their right flank was on a convenient hill.   Only their left flank was open.

No surprise that the Austrians ignored the town and attacked the weak flank.  To do so they created a reserve of two grenadier brigades, which supported the attack.   Their weakest corps moved towards the town, to protect the left flank of the attack.  This forced the Bavarians to move down from their hill.

The battle was decided by two cavalry melee.   All four brigades started the game with 20% casualties.   This evened the odds, but the first to suffer new casualties were almost certain to rout.   The Austrian cavalry had the luck of the dice, and routed the enemy cavalry with 50% and 60% casualties.  They suffered 30% casualties to each brigade, which meant both were out of the battle.   But the loss of the Bavarian cavalry allowed the Austrians to concentrate their infantry strength against the weakest Bavarian flank.

The Bavarians had lost the campaign before this battle even started.    But the loss of Falkenberg meant that they would have to retreat off the map.   This is a decisive defeat.

Interesting wargame and campaign.  There will be some major changes to the campaign rules before the start of the next campaign phase.   More of that later