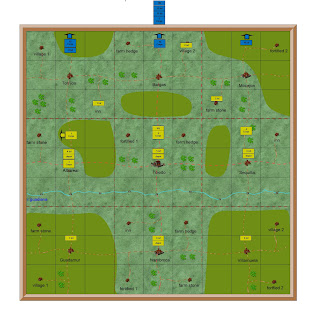 The failure of 15th Vistula corps to take Albareal has made it impossible for Suchet to continue his invasion of Andalusia.

7th French corps have already retreated to Madrid, and it will take two more days for them to rally, reorganise and become operational again.

15th corps also requires time to rally and recover.  If they try to do so at Torrijos they are in danger of being attacked by 1st Spanish corps.

Rather than risk the loss of his whole army, Suchet orders 15th and 16th corps to retreat to Madrid.

Two of the four Spanish corps are now out of supply, and will lose attrition casualties until they resupply.   Therefore Giron is in no condition to pursue the French until he can reorganise his army.

This most unusual outcome was not anticipated.   The French army is still largely intact, and should be able to recover and continue their invasion of Andalusia.   However it would take three days for them to be ready to resume the invasion.   And in the meantime there was a real risk they would be destroyed by the Spanish.

The defeat was a technical, rather than a tactical, one.   The French should have been able to secure the three northern towns of Torrijos, Bargas and Mocejon.  They could then have halted to open supply depots and regroup.   They could then have continued to attack the Spanish and open the road to Seville.

Normally when a corps is forced to retreat off the map they are not allowed to enter again, and are out of the campaign.   However I was prepared to allow 7th corps to do so.  This was because their retreat was necessary after a defeat, but it was only a minor defeat.  It was my fault for not allowing for this when I set up the campaign.  I should have started with the French in occupation of the three northern towns.  The fighting would then have taken place against the three centre towns.  Either side would then have had map space to retreat and rally after a minor defeat.

However even without this technical problem, it was the right time to end the campaign.   With the failure of the Poles to take Albareal there was only one French corps left to hold four Spanish corps long enough for the other two to regroup.

Two of the Spanish corps were already out of supply, and the other two down to one days supply each.   So the Spanish would also have required a couple of days to rally and regroup.   This would have meant three days when nothing was happening.

At this stage of a campaign I normally end that phase to allow both armies to recover, and move on to the next phase with two fresh armies.

I enjoyed the campaign, and was quite pleased that the Spanish did so well.   Particularly so with the last  battle, when a very weak Spanish corps held the Vistula at bay for nine moves and allowed the fresh 1st Spanish corps to arrive to support them.