I have made a new map for North Germany, which looks a little better than the very practical one I have used to date.   It looks similar to the one I used with the previous system, but it is completely different.

There is no north coast detail, because each square on this map represents one 2x2 foot scenic square on the table.   This is the map I will use for the higher level grand strategy I plan to create.   But in keeping with my main aim of building everything from the table up, it is in effect just like a very big wargames table.   All of this map could be transposed to the table, but you would need a table 54x18 foot (27x9 two foot squares).

You can see that each corps will be represented on this map, plus the extended supply system.   The main base for the French army is Osnabruck, which is also the main supply depot.   There will be lines of supply running to each corps.   Osnabruck Region is the French rear area, Berlin Region for the Prussians.

With this map it will be possible to do any necessary post campaign redeployment, plus sieges.   I am not sure how much I will develop this new side of the campaign, but I am really pleased that I now have the option. 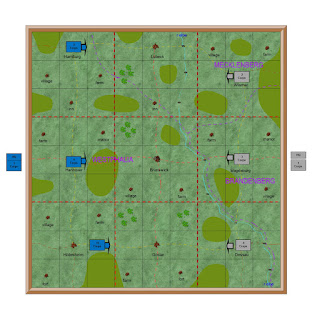 Because this is the first phase of the new campaign, both armies enter from opposite sides of the map on day one.   Both armies have four days supply, with a further three days in the depots of their rear area.

Both armies have occupied the towns nearest to their rear area.   If halt for one day they can establish depots in each town.   They can then bring forward supplies, continue their advance and still remain within supply range.

However 13th Polish corps (bottom left) have moved through Hildesheim towards Goslar.  In doing so they have moved beyond their supply depot at Detmold.  They have gained a tactical advantage, but have only three days supplies left.   If they do not position themselves within 3 squares of a supply depot by the end of those three days they will start to lose attrition casualties (10% of one brigade each day).

So you will see that there are interesting new tactical decisions in this new campaign concept.   The aggressive attacking player must lose in the end, unless he can also plan his supply system.

And things can only get more interesting after the first battle.    The loser will find themselves forced to retreat for at least one day, throwing all of their supply plans into confusion.