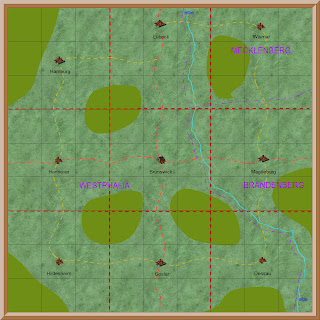 Brunswick Region
This is the third time I have started this campaign.
It was always planned as a test campaign, to try out new ideas.

The first attempt was using all of Brunswick Region as the campaign area.   As I explained in an earlier campaign update, this would involve too large an area.   The 6x6” wargame table would cover an area from Lubeck to Goslar, which is 294 km.

It was my intention to have an ongoing campaign on this map, with the phases controlled by the number of supplies available to each army.  This would be restricted to seven days.  When one army ran out of supplies the phase would end.   This also proved unsatisfactory in test play.   More time was spent building and moving depots than in fighting battles.

We fought two battles using this first attempt, and then decided it was not working 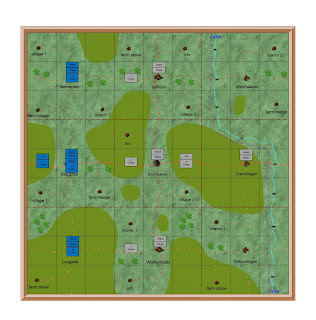 Brunswick District
The second attempt would stick with our tried and tested campaign phase system.   The nine districts in Brunswick Region would each be a campaign phase.   However this meant that I had to redesign the maps to create nine wargames tables out of each Region.

This map is the result.   Each of the nine sections of the District has a named town, and is also a wargames table.   The map looks very similar to our previous campaign maps, except that the nine towns/tables are outlined in red.

It was only when I play tested the system that I realised this would mean that the first three battles would be for possession of the centre towns.   All three would be fighting in a built up area.   Our rules cover this type of wargame, but they allow very little tactical skill, and depend more than most on the roll of a dice.   The table is set with opposing corps on the left and right section, and the town in the centre.  Both sides make a dash for the town, and meet in the centre.   The outcome is then decided by skirmish fire (very slow) or a melee (very fast).

Unfortunately in the first two battles/games the attackers (the French) lost.   They then had to retreat, leaving the defending Prussians in an even stronger position.  After two defeats the campaign was effectively decided in favour of the Prussians.

So I have now started a third attempt.   In future corps will not be positioned in towns, unless they are under siege.   They will deploy in front of the town, resulting in a more normal battle/wargame.   The attacker will have more options, including flank attacks.

I think it will work, but it is now down to the play test campaign to see whether it does or not.
Posted by thistlebarrow at 11:05