Background to the new 1813 campaign 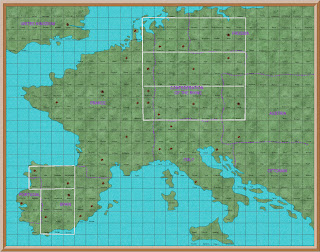 New 1813 Campaign
This is a fictional campaign designed to produce interesting wargames.   It is not intended to recreate the historical campaign, but is loosely based on it.

The current campaign allows me to fight mini campaigns throughout Germany and Spain.   Each is a stand alone campaign, bearing little relation to those which went before or come after.

The new campaign will allow me to introduce a grand strategy element which will coordinate the five campaign areas and each mini campaign fought within those areas.

The first step is to create a new military command system throughout Germany and Spain.   This is now complete, including new maps for the whole campaign area.

The next step is to create the administration to allow me to control and coordinate these mini campaigns.

First I need a fictional historical background, a framework for the mini campaigns which will follow.   Below is the first attempt at this background 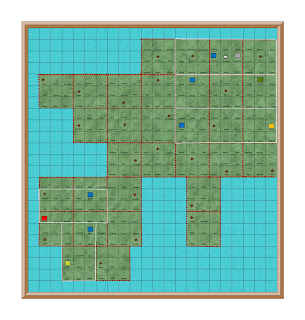 Regional map showing start positions
Background
In 1812 Napoleon invaded Russia with an army which included many nationalities, including Prussia, Austria and the Confederation of the Rhine.   The invasion ended in his complete defeat and rout.   By the end of the year the broken survivors of his Grande Armee had reached the relative safety of Germany.

In January 1813 Napoleon ordered the creation of five new armies, three in Germany and two in Spain.  There were three sources of manpower available to him.   The survivors of the Russian campaign.   The large number of experienced men serving in Spain.  And new conscripts from France, Germany and Italy.

Large numbers of experienced men were transferred from Spain to Germany to form the cadre of these new armies.   They were replaced with inexperienced conscripts.

The threat was from the large, but exhausted, Russian army which had halted at the river Elbe.

In Germany he could rely on Prussia to hold his northern flank, and Austria the southern flank.   What was left of the Grande Armee would hold central Germany.   The new brigades, divisions and corps would be formed in France, and deployed in Germany when completed.

Allied Plans
In early January Britain held secret talks with Austria, Prussia, Russia and Spain to form a new alliance against Napoleon.   They agreed a coordinated plan of attack in Germany and Spain.

French Plans
On 1 February 1813 the allies declared war on France.

This was not a complete surprise to Napoleon, who had received intelligence throughout January which caused him to prepare for an Austrian/Prussian/Russian attack in Germany.

However he had not yet completed the major reorganization of his new Grand Army.   Consequently he would not be able to oppose the initial allied army advance into central Germany.

On 20 February 1813 he issued orders to his five armies