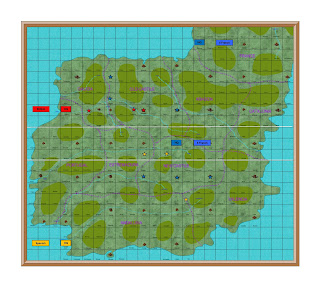 Each campaign suggests areas for improvement, and this one was no different.   The two major problems on the table were command and control and insufficient space to wargame.   I will be looking to amend the campaign and wargame rules to overcome both of these problems in the next campaign phase.
Posted by thistlebarrow at 09:28

An excellent summary of the campaign. I thoroughly enjoyed following it.

I look forward to the next!

Glad you enjoyed the campaign, it was good fun playing it as well

The next one should be interesting. It is set in northern Germany and features Napoleon v Blucher. The French army will include the Old Garde. They are not supermen using my wargame rules and the other three corps are relatively weaker than the Prussian corps.

Quelle suprise! Having followed the early moves and actions of the campaign (before the day job interrupted my following and own posting on blogs) I would not have expected a French victory--albeit a close one.

Now to catch up with your current 1813 campaign...

I seems a very long time ago that I was doing the Albacete campaign!
We are already on day 6 of the Salzwedel campaign, the one after Albacete.

So you have quite a bit of catching up to do