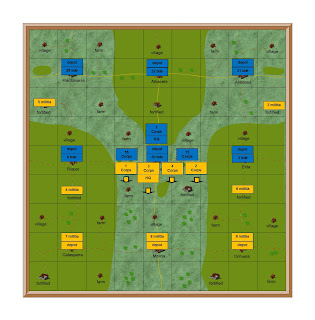 As said before I thought this was a great campaign, it really came down to the wire and showed off the brilliance of your system. I've been wondering: seeing how long you've been at this, I wouldn't be surprised if your campaign has actually seen more battles now than the actual Napoleonic wars. Do you keep some measure of track of the grander strategic situation? Does success in one campaign affect the greater course of the war across Europe? And how do you choose where to launch the next campaign?

I seem to remember having 'Amateurs think about tactics; professionals think about logistics' dunned into me ... and the result of this campaign proves the truth of that adage.

I think it is really necessary to include logistics in any campaign. But, for me, the objective is to make it effective but simple to use. I have always striven to keep the campaign simple to run and avoid masses of administration for limited wargaming.

At last I think I have got it about right. In all of my campaign areas logistics determine how long a corps can operate, and how far it can range, before it runs out of supplies. The consequence of being out of supply is a simple 10% of one brigade for each day it remains. This only applies to infantry, such casualties on cavalry or artillery would have too much effect on the campaign. But the sting in the tail is that I dice for which of the four brigades will suffer the loss. If lucky it will be a conscript brigade, but it could just as easily be an elite or average brigade.

In Spain logistics plays an even more dramatic part in the campaign, particularly for the French. As the recent campaign has shown it can cause major problems for the French commander.

Glad that you enjoyed the campaign

At the end of the Albacete campaign there have been 284 battles fought as wargames since the campaign started in April 2009.

The campaign is designed to produce interesting wargames. It is loosely based on the historical situation in January 1813, but quickly took on a life of its own. It is a completely fictional campaign.

Each phase is independent of all the rest. The result of a phase has an influence on where the next phase in that area will take place. But both armies start the new phase at full strength and with four days supplies.

There are five campaign areas, each with one French and one allied army. Each campaign phase is in sequence. However I do sometimes fight a campaign phase out of sequence. For example if I have designed a new set of rules for Spanish guerrillas I may fight southern Spain when it should be one of the other areas. But I always try to keep to the sequence so that all of the figures and terrain get their turn on the table.

I do keep a strategic map of Europe from the north coast of Germany to Gibraltar in southern Spain. All campaign phases are recorded on that map, showing whether won by the French or allies. But this is more to illustrate what has happened in the past, rather than the current strategic situation in the fictional campaign.

The campaign is surprisingly easy to administer. All maps, orders of battle campaign diaries and battle reports are stored on the computer. It takes me less than a day to create a new campaign phase from scratch. It takes an hour or so to process each campaign day in the current campaign. Battle reports take a little longer. I take a photo at the end of each move on the wargames table, and type up the battle report move by move.

It sounds, and looks, like a lot of work. But it only takes about four to six hours a week to keep it all running.