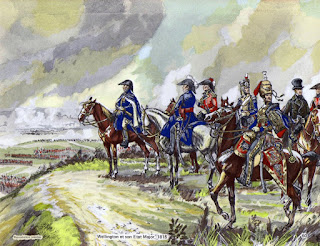 This was a one off project which was inspired by my visits to Wellington’s Iberian battlefields.   In preparation for those visits I had done a lot of research, and had gathered with a lot of information and maps.

Although quite busy with my four main blogs, I decided to wargame thirteen of his battles in Portugal and Spain and also Waterloo.

As with my 1813 campaign these would be wargames, not an attempt to recreate the actual battles.   There were two reasons for this decision.   First my armies were already organised for use in my campaign.   Second my wargames table did not allow recreation of actual battlefields.   I is based on a 2x2 foot scenic squares with permanent hills, rivers and roads.

Having decided to record each wargame using the blog, I wanted it to be a permanent reference source for anyone wanting to game themselves.   I started a new blog, and again used the Labels system to give access to each wargame.

Each game has a short introduction.   This includes a map, a short background and historical totals of infantry, cavalry and artillery.  There is then my own order of battle and a photograph of the table at the start of the game.  The actual game is recorded in text and photographs.

I started Rolica in November 2009 and finished Waterloo in May 2012.   This may seem a long time to wargame just 14 battles.  But it was always intended to be a break from my 1813 campaign.   As that campaign grew from solo to PBEM I found that I had less and less time for the Wellington project.   But because I already had the maps, order of battles and knowledge of each battle, it was easy to set a game up when I needed a break from the main campaign.

I was quite disappointed when the series came to an end.   I experimented with doing something similar with Napoleon’s battles.  But the problems with the table and my wargame order of battle discouraged me.   However I have recently returned to this subject with my proposed “Nearly Napoleonic” series.