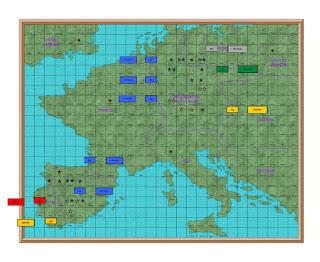 I started the Magdeburg Campaign blog in April 2009.

I had spent months preparing and setting up what would be my long running 1813 campaign.    It was always my intention that the campaign would provide interesting battles to wargame.   It was never intended to be a historical campaign.  The aim was to use all of my collection in rotation, and to do so I had designed a campaign which would have five areas.  Three in Germany and two in Spain.   Each would have an allied and French army.   The campaign was designed to be fought in phases.   Each phase would be similar in size to the Waterloo campaign.

The first phase was set in Magdeburg in northern Germany and would feature Marshal Davout v Prince Blucher.   I wanted to record the campaign, and decided to do so by using a Blog as the campaign diary.

I would have a different blog for each campaign phase.   The blog would cover the campaign background, the orders of battle of both armies, a diary of each campaign day and a report of each battle.   I had hoped that this might prove useful if anyone else wanted to set up a similar campaign to provide wargames.

This first campaign lasted two months and provided four battles to wargame.  It took ten posts and has had 5811 page visits.  It worked very well, and provided a good template for all of the campaign phases to follow.

In October 2009 I changed to a PBEM campaign, with ten players each representing an allied or French army commander.   It would continue as such until February 2016 when I reverted to solo again.   During this period the blog provided a daily update of the campaign.   With five areas in play at the same time there was a huge increase in administration, and consequently in posts on the blog.   There was also a permanent backlog of battles waiting to be gamed.

I enjoyed running the campaign.  It was a big administrative task and constant pressure to complete wargames to avoid slowing down the pace of the campaign.   The aim was to game one campaign day each week.  To do so I had to rely on the players to send in their orders promptly when they received the weekly report.   By far the majority did so, but as always there were exceptions.

However it was the standard of battles which eventually caused me to revert to a solo campaign again.   Most players only took part in one or two campaign phases.  So there was a constant stream of new players entering the campaign.   Each had complete freedom to write daily orders as they wished, and each kept making the same basic mistakes.   Consequently most of the campaign battles were one corps per side.  The uniforms would change, but not the style of game.

I longed for more complicated battles, and eventually decided the only way to achieve that was to revert to a solo campaign.  I have continued to play solo since February 2016.

The early phases each had their own blog.  But when I converted to PBEM there were five phases on the go at the same time.   All were posted on the same blog, and only changed when there was a major change in the campaign concept.   Consequently it has proved too difficult to calculate how many visits there have been to each, or indeed all, of the blogs dealing with the campaign.   But there have been 69 campaign phases, each an independent campaign.   And in total they have provided 252 battles to wargame.

But far more important the campaign has provided a framework for our wargaming for the past nine years.

And the Campaign Diary Blog has provided a permanent record of each move and wargame throughout that same period.   Using the index I can easily find any of those 69 phases, and even any of those 252 wargame reports.

You will find a link to the 1813 Campaign Diary blog on the right
Posted by thistlebarrow at 12:31