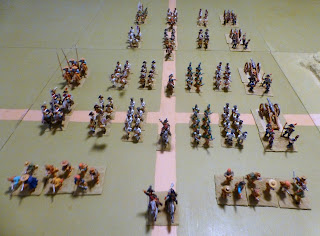 Not only are the Spanish corps weaker than the French, but their troops are also inferior.   Most are conscript, and therefore have low morale and are more likely to break and run in combat.   Most have poor quality must volley and skirmish ability.
Their cavalry are all conscript.   Only their gunners are equal to the French.

If a Spanish corps is forced to fight a set piece battle in the open they will probably lose.   However they are usually on the defence, and can usually choose their location to fight.   They have a large number of towns, and each town has a garrison.  The garrison cannot be moved, and does not come under the direct command of the Spanish commander.  But by deploying around a town they gain an extra infantry brigade.

The main strength of the Spanish army is the militia garrisons and the guerrilla bands.  I will cover both next week.

You will find the campaign diary blog here