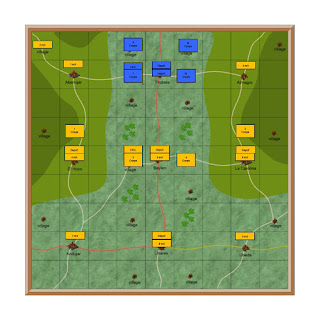 At the start of the campaign the French have one depot (Probete).   The Spanish have four, including the main depot at Linares.

There are Spanish militia brigades in 8 of the nine cities/towns.   Because Probete is occupied by the French, the garrison has left the town and become a guerrilla band (top right).

The French plan is to send two corps down the main road (red), engage any Spanish they find and take Linares.   A third corps will move through the mountains on the left, and a fourth on the right.   They will protect and support the main army as they move south.

The Spanish plan is to avoid a formal battle as long as possible, and to rely on their guerrilla bands to disrupt the French communications and supplies.

Each Spanish corps, and militia brigade, starts the campaign with three days supplies.   Supply rules are the same for the Spanish Regular Army.   A militia garrison will always supply.   A guerrilla band must be in a town or village to resupply.

So a French corps must either remain within three squares of Probete, or must establish depots as they advance.  To do so they must detach a full strength infantry brigade to become the garrison.  The garrison will forage sufficient supplies for one corps each campaign day.

A guerrilla band can attack an isolated garrison or a supply train.   To do so they must be in the adjacent square.   They may not attack either if there is a French corps within one square of the garrison or supply train.

You will find the campaign diary blog here
http://1813pbemcampaigndiary.blogspot.com.es/