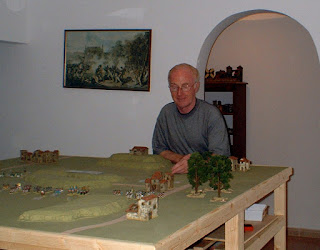 In 2005 we decided to move to Spain on retirement.   We bought out house “off plan” so we had a year to plan whilst it was being built.   We were also able to have the utilities room expanded to be our wargames room.

For the previous 20 years we had used a 12x6 foot table to wargame, and our collection of model soldiers was designed to provide that size of game.   With our move we would have to make do with a 6x6 foot table.   This was not a problem, as we did not plan to start a club, but would just wargame together.

I had just completed updating our model soldier collection.   The 28mm were mostly Front Rank, the 18mm AB Figures and the 6mm Heroic and Ros.   With our smaller table our wargames would have to be half the size.  Consequently I would only require half of the figures.   Throughout 2005 I put figures on EBay and managed to sell them all.

Our converted garage would have to be returned to its original use.    Our much loved wargames table would have to go, as would the shelves for storing the figures and scenery.   I could not find a new home for the table, so it was dismantled and my son took it off to Newcastle where it was used to convert his garage into a home cinema room.

Packing and moving the figures and scenery was a major job.   All had to be removed from their bases and packed in ice cream boxes, which were in turn packed in crates.   It took weeks, but was well worth the effort.   Not a single figure or building was damaged in the move.

Preparation for the move meant that we could not do much, if any, wargaming during 2005.   So I carried out a major review of my wargaming objectives.  It is ironic that after about 30 years of painting figures almost every day, I now found that I did not wish to continue to do so in retirement.   Instead I was determined that I would wargame with the figures I already had. 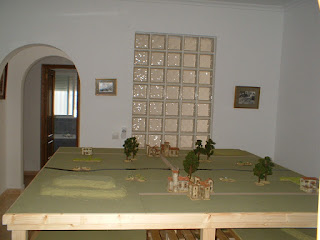 
Starting with the wargame table I created army lists which would allow me to play with all of my figures and all of my scenery.   I wanted to be able to fight multi corps battles, but given the size of the table each corps would have to be pretty small.   My reduced collection consisted of national armies of 128 infantry, 16 cavalry and 4 artillery crews.   This would provide four corps of 32 infantry, 4 cavalry and 1 gun each.   There would be Austrian, British, Prussian, Russian and Spanish armies.  There would also be 7 French corps (including a Garde corps) and 3 Bavarian corps.  Plus one Baden, Italian, Westphalian and Polish.

To ensure that I would use all of the figures I created a fictional 1813 campaign.  It would cover Germany and Spain and there would be five allied and five French armies.

Next came the wargame rules.   All of the rules available at that time were designed to fight battles with 12, 24 or 36 figure battalions or brigades.   I needed a set of rules to cover 8 figure infantry brigades, 4 figure cavalry brigades and 1 gun and crew per corps.   I was currently using LFS rules, and they became the framework of my new Napoleonic Wargaming rules.   By the time I had finished there was not much in common with LFS, but they do deserve a mention as being the inspiration for my own rules.

Then came the campaign.   It would be a fictional campaign designed only to provide interesting battles for us to wargame.   They started life as a list of guidelines, but gradually became formalised.   When I converted the campaign from solo to PBEM I put them on a blog so that they would be available to all taking part. 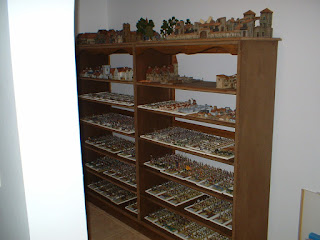 About half of the figures and scenery


It has all worked much better than I could have hoped.   The campaign is the framework for all of our wargame and model activities.   I have not bought or painted a single figure in the past ten years.  Running the campaign has expanded to fill the time I want to devote to wargaming.   Jan has produced a mass of scratch built model buildings to meet the ever changing requirements to transfer the campaign to the wargames table.   There is always a wargame on the table, and we usually manage an hour of play most days.

The future I imagine will be more of the same.   It suits us so well that I can see no point in changing it.   The advantage of it all being my own design is that I can easily amend either the wargame or campaign rules to overcome any failings we encounter.

It would be hard to imagine life without wargaming.   We do have other interests and hobbies, but our wargames table plays a very important part in our pleasant retirement.