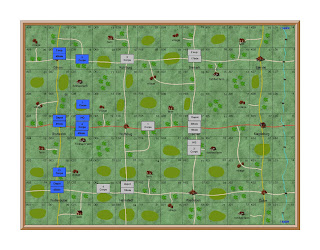 Both the campaign and the wargame rules are the same, and the general outline of the campaign is unchanged.  But running it solo rather than have players taking the role of each army commander has made a big difference.

Most important the campaign flows much faster and smoother.   I don’t have to wait a week for orders to arrive, nor do I have to chase them up.   The orders always make sense, and always result in more challenging and interesting wargames.

However I do miss the imput and influence of other players.   I don’t miss the frustration of having to chase orders.   I certainly don’t miss the constant effort to replace players who have left, particularly if they have only taken part for a few weeks.   But I do miss the pressure of working to a timetable to keep the campaign on track.   I do miss trying to make sense of twelve sets of orders each week, translating them to update six campaign areas and then producing twelve reports which will result in the next weeks twelve sets of orders.   Most of all I miss sharing the campaign with other wargamers and receiving their imput.

On the other hand I got more personal enjoyment out of each campaign phase.   Although I write orders for both sides, the campaign design prevents it from being too predictable.   The campaign map itself has become an extended wargames table.  I can plan where battles will take place, and what terrain they will be fought over.   The result is more interesting and challenging wargames.

When I ran the PBEM campaign both sides had a campaign objective which involved taking and holding a town or city in the centre of the map.   Now that it is a solo campaign one side has orders to attack, and the other to hold and defend.

However the wargame rules ensure that the outcome of each battle is very unpredictable.   Jan and I both have a comprehensive knowledge of the rules, and rarely make a mistake.  So the outcome almost always relies on the luck of the dice.

The outcome of the battle, and in particular the casualties received, will greatly affect the subsequent flow of the campaign.   The supply rules will often force a halt, with dire consequences for that side.

I had thought that it might become too predictable when I wrote orders for both armies.  But I am pleasantly surprised to find that I have become much more involved with the progress of the attacking army, frustrated when they fail to achieve their campaign objective and quite excited when they win a critical battle.

Magdeburg has been a good example of what I mean.   Napoleon, with the Imperial Guard as part of his First Army, had a campaign objective of taking that city.   Blucher desperately needed to hold it if he was to prevent the French from taking Berlin.   To do so would really mean the end of the campaign in northern Germany.

I was rooting for the French, as the attacker they would carry out my campaign plan.    But I was quite concerned what would happen if they did in fact win.   I need not have worried.  There were only two battles in this phase of the campaign, and Napoleon lost both of them.   In fact that meant that I lost both of the wargames.   Given that one quarter of the French army were the Garde they really should have done much better.    However luck, and the dice, decided otherwise.

The campaign lasted one month of real time and I enjoyed it much more than I expected.   I am really looking forward to the next phase and planning how Wellington can take his army from Oporto into Spain.

You will find the Magdeburg campaign diary and battle reports here