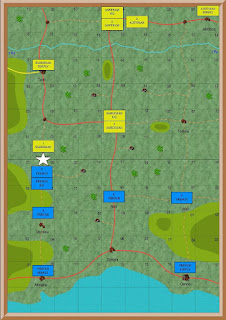 The Gera campaign has taken up most of our attention over the past couple of weeks.  After a long quiet period all hell has broken out, and there have been three major battles in two campaign days.

But I have still found time to get my new Campaigns of Napoleon going.

This is planned to be a long term project to provide Jan and I with wargames to play in between our 1813 PBEM campaign.   It will be a series of campaigns based on Napoleon.   Again it is not meant to be a historical refight, rather a series of solo campaigns each based on an historical one.

The first one is based on Bonaparte’s first campaign in Italy.   In April 1796 the young general Bonaparte took command of the tattered and demoralised Army off Italy.   His quickly defeated the Sardinian army of General Colli and captured Turin.  He then turned on the Austrian army of General Beaulieu and chased them out of Italy.

This is a campaign I know very little about, and it was great fun researching the campaign in order to create my fictional campaign.

As it is a solo campaign I can work on it when I feel like it.  No waiting for orders to arrive, and chasing those that are late.  No plotting movement on a large master map and writing umpire reports.   No mass of messages to track and deliver.   Two small armies each of just four divisions.   A small map is sufficient for the compact campaign area.   And I can manipulate the movement and create battles where and when I want.

It’s rewarding to run a multi player PBEM campaign and to keep the whole thing going despite the challenge of coordinating players from all over the world with varying degrees of interest and commitment.   But it is a serious task, and it can be a thankless one.

On the other hand solo campaigning is fun and fast.

The French are following Bonaparte’s strategy of defeating the Sardinians before the Austrians can join them.   We have played six campaign moves and fought our first battle.   It is fought at Fossano on the road to Turin.   Not the site of an historical battle, but the results are the same.   Bonaparte has won a convincing victory and Colli is retreating to Turin.   The Austrians are advancing on Alessandria quite unaware that their allies are in headlong retreat to Turin.

It you would like to have a look at the campaign to date, and see the new layout for our battle reports, you will find it all here