Maps for Campaigns of Napoleon 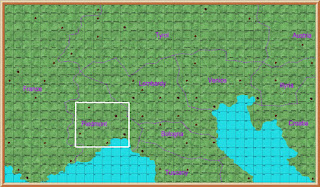 It’s been a very frustrating week as I struggle to produce suitable maps for my proposed new series of wargames based on the campaigns of Napoleon.

I have read a bit about the campaign, but I would not say I know it well.   So I turned to Esposito’s  “History and Atlas of the Napoleonic Wars”.  I have had a hard back volume for more than 30 years, and it is one of the most used books in my collection.

The maps for my 1813 campaign are all based on the maps in the AA Road Atlas of Europe.   I have drawn a grid with 20 miles per square, which represents one day s march and one wargames table.  I then created maps of northern Europe and Spain using ProFantasy.    This was fine for my PBEM campaign, where I am not trying to recreate actual campaign areas

I did not have one for Italy, so most of last week was devoted to making one on ProFantasy.   The result can be seen above.    It’s not difficult to do, but it does take some time.   I know how many squares are required as they are drawn in the AA Atlas.  So I just have to take the name of the largest town in each square and type it on the ProFantasy map.  This gave me a map of Italy and part of Spain, with each square representing one days march or one wargame table. 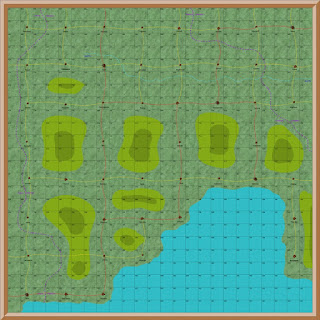 I then outline the proposed campaign area.   I then have to make a new map, which will be the campaign tactical map.  This has nine squares for each one on the larger map, and each square is a 2x2 foot square on my wargames table.  And this is where it gets difficult.

Because my wargames table consists of scenic squares, all the roads and rivers have to exit the square in the centre of one side, so that they will join the next square.  All hills have to be restricted to one 2x2 foot square.   Finally there are a limited number of available squares, 21 at present.   Any scenery I include on the tactical map has to meet this restriction.

And this is the end result.   It works for the wargame, but does not look very pretty.   Nor does it bear much resemblance to Esposito’s map of the campaign.   This is because the towns of Montenotte and Dego were the scene of historical battles, they are too small to feature on a present day AA Atlas of Europe!

So it’s back to the drawing board.   I have no idea how I will solve the problem, but I am considering whether it might be possible to use Malcolm McCallum’s excellent campaign maps murat.ca/maps.htm

I have considered them before, but could not match the distances with my AA maps, nor the road and river system with my scenic boards.   On the other hand it includes national borders and terrain features, both of which are very difficult to research.   I am not sure how accurate they are, but that does not matter too much.   Anything I design will be based on guess work anyway.