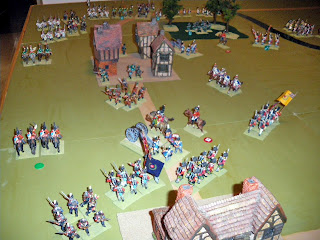 We are currently fighting a non campaign game, and the dreaded luck of the dice has raised its head once more. We were really looking forward to this game. It’s bigger than many of the campaign games and does not have the pressure involved when you are fighting some else’s battle.
Right from the start the dice refused to favour me. It’s not so much that I could only roll 1s or 2s, but time after time I failed to hit anything with my artillery. My morale rolls were always low, not enough to rout but certainly sufficient to be shaken. Dice plays an important part in our rules, and a long run of poor dice can have a dramatic effect on the game.
I am attacking, so good morale is even more important than when in defence. The attack has stalled, and of course this means the whole game has stalled.
At first Jan was quite pleased. She needed to inflict casualties before I could close to attack range. But this has gone well beyond that stage. It seems quite certain that she will win the game, but there is little pleasure in winning when it is only down to dice.
Neither of us play just to win, but rather to enjoy the game. And a one sided run of poor luck like this just robs the game of enjoyment. Worst, there is nothing either of us can do about it – other than abandon the game. We could do that, as it is not a campaign game. But neither of us want to “give in”.
Worst of all, there is nothing that can be done about it. The element of chance in our rules is what makes the games so enjoyable (for us anyway). And to adjust the rules to reduce the element of chance would spoil our enjoyment even more, as it would make the game so much more predictable
So I guess that we will just have to struggle through the remaining moves with the best grace we can muster, and hope for a more even game next time.