Last of the summer reading material 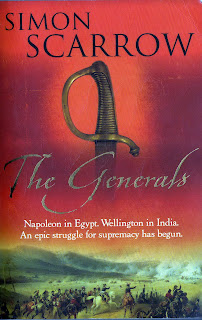 Here in Spain the hot summer days are turning into the much more pleasantand cooller autumn. It will soon be time for us to abandon the lazy summer routine and take up our more energetic walking routine of the rest of the year. I will still do my share of reading, but it can no longer be considered part of the summer reading. So it is appropriate that I just found time to finish the "The Generals".

This is volume two of the series which follows the lives of Wellington and Napoleon. This book covers the period 1795 to 1803. This covers Napoleon in Egypt and Wellington in India.
I first read this book when it was published in 2007, and enjoyed it enough to get the whole series. I then read “Young Bloods”, which is the first volume. And having enjoyed it so much decided to read “The Generals” again followed by the last two volumes.
To be honest I did not enjoy it as much as “Young Bloods”. I don’t think it is because I had already read it some years ago. I am pretty familiar with the story line, and wanted to read the four books in sequence. I also thought that I would enjoy it more, as it deals with a period of their lives which I am more familiar with than the previous book. I did enjoy it – just not as much.
It may be because Napoleon in Egypt is my least favourite period of his military career. I love reading about his Italian campaigns, and I having walked many of the battlefields I even enjoy reading them again. I also enjoy Austerlitz, Jena and so on. But I have always found Egypt a little boring. No doubt because I have never visited any of the battlefields there.
Equally I find India the least interesting of Wellingtons campaigns, or Wellesley as he was then. I have read, and enjoyed, the Sharpe series set in India. I then read, and also enjoyed, Jac Wellers “Wellington in India”. Not sure why I find it less interesting than the Peninsula, but probably because I have visited all of his Portuguese and Spanish battlefields.
Whatever the reason I found “The Generals” less of a good read than “Young Bloods”. I have already bought the last two books in the series, so I will read them in due course. But not with such anticipation as I approached “The Generals”.
Posted by thistlebarrow at 22:21