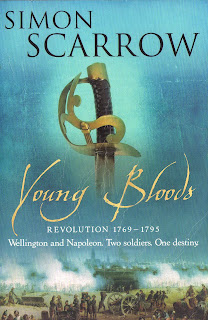 I needed a little light relief after struggling to read Nick Lipscombe’s epic “Peninsular War Atlas”. And Simon Scarrow’s “Young Bloods” was just what I needed. It tells the story of the early years of Wellington and Napoleon, from 1769 to 1795. It is a novel, rather than a history.

I had read a number of books about the personal, rather than military, lives of both Wellington and Napoleon. In particular Elizabeth Langford’s two volume biography of Wellington, and J M Thompson’s “Napoleon Bonaparte” So I was not particularly interested when I first heard about this project in 2006.
Last year a friend, another active reader but not a wargamer, mentioned that he has read all of the “Sharpe” series. I have read them a couple of times, and enjoy them for a little light reading. He mentioned that Simon Scarrow had written a similar series about the Roman Army called the “Eagle” series. He loaned me the first volume, and I was hooked. Over the year I read the whole series.
It was then that I realised that Scarrow had also written four books about Wellington and Napoleon. When we were last in UK I bought all four, and have just read the first one.
I know that some wargamers are dismissive of the “Sharpe” series, and I suspect that they will feel the same about “Young Bloods”. I have always admired that Cornwall wrote a good yarn based on an historical incident. And Scarrow has done something similar here. I found it a very enjoyable read, and an excellent introduction to the early life of Bonaparte and Welsley.
I am looking forward to the second novel, “The Generals”, which covers 1795 to 1803.
Posted by thistlebarrow at 13:23