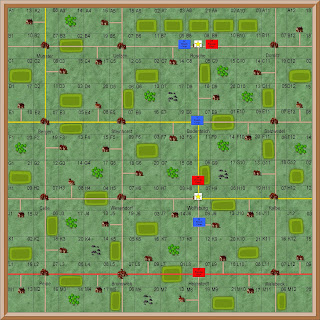 Battles of Rosche and Wolfsburg


Much to our surprise, the battle of Rosche has resulted in a convincing Prussian victory.

Both corps had fought previously, and both had casualties from that earlier battle. But the Prussians had more, and they were concentrated on fewer infantry brigades. So they started the battle in a worse condition than the French.

The Prussian commander could have retreated, but decided to stand and fight. I had thought this a very unwise decision. How wrong was I !

As always it was down to luck, or lack of it.

The French artillery should have scored at least one hit on the weak Prussian infantry. They only needed 8 with 2D6, but kept on missing

The Prussian cavalry had one casualty, so the French full strength brigade should have won the melee. They didn't.

The massed French infantry column did win the first round of melee. But they lost one brigade during the approach and then had to face three Prussian brigades with two French. Having advanced into the gap left by the broken Prussian brigade, they had to turn to their left to face the remaining Prussian infantry. In doing so their conscript brigade was in front, and their elite brigade in reserve. They lost the second melee.

While the French gunners fared badly, the Gods of War smiled on the Prussians. Counter battery fire is usually pointless, as you require 11 with 2D6. The Prussian gunners scored 12 and got a hit. The French gunners rolled 1 for their morale test and routed.

The French bad luck extended to their morale tests, and that was the final straw. As the gunners abandoned their guns, the nearby French square had to test their morale. They had no casualties, nor did they have any supports or a general within command distance. They needed 3 to hold, they rolled 2.

By move 11 the French side of the table was spotted with red markers, which indicate a rout. Every single brigade had broken and run.

As the French commander I started the game full of confidence. Despite early set backs I still expected to win up to move 6. From then on it was a matter of surviving.

This was the sixth battle of the campaign. After the first four the French were in a strong position, and seemed very likely to win the campaign. Then Blucher organised a surprise counter attack in the south. If this went wrong the campaign would have ended it a French victory. It didn't go wrong! The French were shattered, and retreated along the road to Hanover.

With this battle the French have lost the north and south. All will now depend on the centre.

Second Wolfsburg looks like being the most complicated, and most important, battle of the campaign to date.

Its about to start, and you can follow it on the 1813 Campaign Diary blog
http://new1813campaignhotmailcouk.blogspot.com/
Posted by thistlebarrow at 11:03