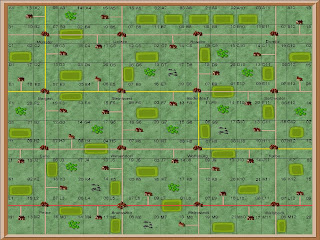 After 21 moves and five battles, the current campaign is probably nearing its end. I say “probably” because I have no idea when it will actually end. The fifth battle is still being wargamed, and could go either way. If the Prussians were to lose with heavy casualties the campaign could end in a couple of moves. If the same were to happen to the French, it might go on for another 21 moves. If you want to follow the battle of Helmstedt, and the campaign, you can find it on 1813 Campaign Diary on the right under My Blog List.
After 21 moves it seems a good time to review what went well and what went not so well. I do not want a long delay between the end of the Hanover phase of the 1813 and the next one (possibly eastern Spain). So I have raised two points for consideration on the campaign forum. First is off road movement and second variable movement.
The current rules only allow on road movement. Because the map is based on the scenic squares we use on the wargames table, this has resulted in a very grid like movement. It also means that movement is very predictable.
A change would appear popular with the players, some have suggested an increase in roads, to allow more north to south movement. This would cause problems, as the tactical map is related to the strategic map, and extra roads would mean extra squares, which would destroy the connection between the two maps.
The tactical map is really just series of wargame squares. On the wargames table off road movement is allowed without penalty. So it seems reasonable to allow the same on the tactical map 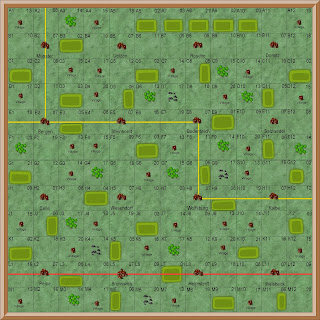 Proposed Campaign Map
My suggested solution is to allow off road movement. The only roads shown on the new map are the main strategic roads in red (city to city) and secondary roads in yellow (between main towns). Minor roads have been removed.
Movement is allowed north, south, east and west. It is also allowed north east, north west, south east and south west. But no movement is allowed in a terrain square, except on a red or yellow road. Terrain would include hills, woods, rivers and broken ground.
I have put the suggestion on the campaign forum and asked for comments. It will be interesting to see whether this simple solution will meet with general approval. You can follow the discussion by clicking on the link under 1813 campaign forum at the top right.
Posted by thistlebarrow at 12:58