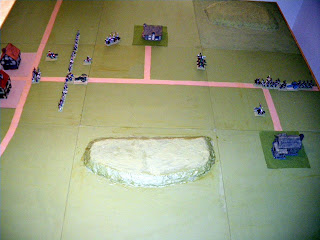 We have just finished the fifth battle of the campaign, and it proved to be great fun.
The battle of Helmstedt started with French XIII corps deployed just east of the town, and 3rd Prussian corps marching to attack them. The Prussian 4th corps was four hours/moves behind and would arrive at the start of move 5. VI French corps was also four hours/moves away, but was waiting for orders. They would arrive at the start of move 9.
Jan, who fought with the French, played a clever delaying battle/game. She kept XIII corps in position and fired on 3rd corps as it deployed. Then she retreated slowly towards Helmstedt.
I fought with the Prussians and could see that night, in the shape of move 12, would arrive before I could close with XIII corps. So I put one brigade in a farm to protect my right flank against VI corps, and put the remaining three infantry brigades into a large column of attack. I could then move them for the cost of just two command points per move.
By the end of move 12 XIII corps was directly in front of the town, and could retreat no more without breaking formation. VI corps had arrived on their left, but too far away to take any part in the battle. My column of attack was within skirmish range of the town, but my artillery was screened by the column, and 3rd corps was too far behind to take part in the battle. 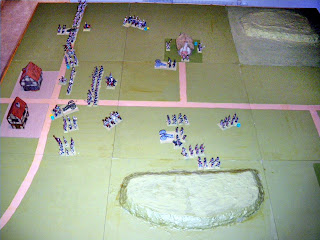 End of move 12
This was when we decided to give it one more move. If we still failed to get a result we would have to fight a second day. I had already decided to have a council of war with the two commanders on each side, and allow them to vote whether to continue or not.
Move 13 proved to be very unlucky for the French, but exceeded expectations for the Prussians. In just one move the centre of XIII corps broke and routed. It was a convincing Prussian victory. 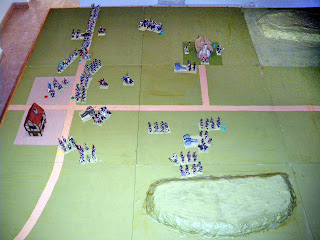 End of move 13
I often wonder how much interest there is in the battle reports, as I get very little feedback. I know that the campaign blog has 10-20 visitors each day, so I know someone is reading them. But I miss the feedback.
So I was particularly pleased that this battle invoked a lot of correspondence to the campaign forum. There are two relatively new players, and much of it came from them. However a comment from Tom McKinney, one of the longer serving members, made me realise that the lack of feedback does not necessarily mean lack of interest. It also made me smile.
“………I usually pick up the day's battle results from my phone before I get out of bed and I can tell you on many occasions I have wished I hadn't started the day that way”
Posted by thistlebarrow at 10:50