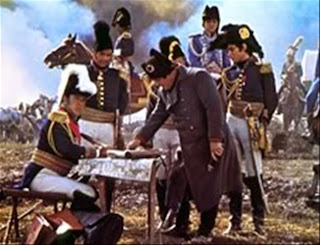 The PBEM campaign is now reaching what I expect to be the critical phase. You will remember that I am running a test PBEM campaign to see whether I can convert my solo 1813 campaign to a PBEM one. There are 10 players, and the campaign has been running for about three months. About a month ago it produced the first two battles. Jan and I have wargamed them, and I have posted a move by move record of them on the PBEM blog to keep the players involved.

I keep the players informed of developments by sending them a (campaign) daily report as their chief of staff. This is written as at 2100 hours each campaign day. It confirms the location of their corps and any intelligence received. A report is sent to each corps commander, with a copy to each commander in chief.

When all ten reports are received I then plot what has happened and fight any battles which have resulted. I then write up reports and the sequence starts again.

The first three
days went smoothly, as I had expected that they would. But on the fourth day there were two battles. One was a simple encounter battle, and involved little work other than to convert it from the campaign map to the tabletop.

It was more difficult to decide how corps would react to nearby fighting. There was one particularly difficult decision to make. It was very similar to Grouchy at Waterloo. One French corps had orders to hold a small town. Two Prussian corps has orders to attack the town. So far so good. But a second French corps had orders to attack a nearby town, which had been occupied by one of the Prussian corps attacking the other French corps. You can see it is starting to get complicated.

Eventually I followed the "Grouchy principle". The corps commander could hear the sound of fighting at town A (which was out of sight behind a range of hills). He had clear orders to march to town B. He followed his orders.

I very much want to keep the players involved in the decision making, and make them aware of why things went right or wrong. In previous campaigns when I had taken part as a player this is the stage where things went wrong, indeed in both cases the campaign just stopped - no reason, no explanation. I am determined that this will not happen this time, at least not from my end.

But it is a lot of work to read 10 sets of orders, some of which have not anticipated that there might be a battle, and to try to make a comprehensive and acceptable outcome.

The ten players have had a break of about three weeks since they last wrote any orders. Some will have followed events on the campaign blog, but no doubt others may not. So it is quite possible that the campaign in which I am investing large amounts of time and energy may be a distant memory to some of them.

I have just sent out the chief of staff reports for the night of the two battles. I had pondered whether it might be better to leave it until after the distractions of Christmas and the New Year. I finally decided that it would be best to maintain the impetus. To those who have been following the campaign blog they have had something to read each day, and they will be up to date. If I were one of them I would be anxious to get the chief of staff update and write my orders for the next day.

So I am anxious to see what response I receive to the reports. I am also aware that some of the players may not have access to computers or email over the holiday period. So it may be a long wait to see whether the campaign survives this critical phase.

Jan and I are spending Christmas with our son and his family in the lovely northumbrian village of Rothbury. Over the past few weeks we have been hearing reports of heavy snow and much travel disruption, particularly in that area. And this weekend the artic weather has spread to southern England with cancelled flights and thousands of stranded passengers in Heathrow. Perhaps not the best time to be taking a flight to UK!

As there will not be another blog entry before Christmas I would like to wish each of you and your loved ones a very Happy Christmas and a very Prosperous New Year from Jan and I.