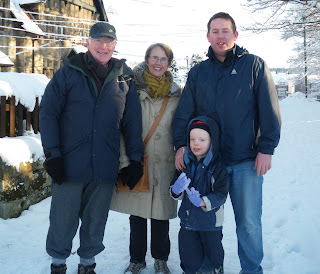 We are spending Christmas in the frozen, snow covered, winter wonderland that the area between Newcastle and Scotland has been for the past month. It came as quite a shock after our mild winter (so far anyway) on the Costa Blanca.

It’s always a pleasure to visit my son and his family, and Christmas would not be Christmas without the grandchildren. But it does mean adjusting to ten days without the toy soldiers and the opportunity to pass an hour or two on the wargames table.

Our PBEM campaign has hit a quiet patch. Partly due to the festive season and partly due to catching up after two campaign battles. I brought the lap top on holiday in the hope that I would be able to spend a day or two sorting out the campaign. But some players have been slow in forwarding their orders. Possibly due to being away from their own computers, possibly due to being involved with their own festivities. Most have replied to the campaign update, just waiting for two more to send in their orders.

Meanwhile I have had lots of time to study my Christmas present. I am sure that I will not be alone in being very grateful to Santa for a copy of Colonel Nick Lipscombe’s excellent “The Peninsular War Atlas”. My son is always at a loss to get me a suitable Christmas present, so we were both pleased when I read a very good review of this new book.

For the relatively cheap price I was not expecting too much. I was pleasantly surprised to find that the present under the Christmas tree was large and heavy. And even more pleasantly surprised when my grandson helped me to open it on Christmas morning and I had my first opportunity to flick through the pages.

First impression was beautiful maps. Not just one map of each battle either. In some cases, Talavera for example, there are five maps devoted to one battle. There is a large scale background map of before and after the battle. Then two maps showing the actual battle, one showing the early stages and a second the main engagement. Finally a three-dimensional map showing hills and valleys.

Then there is the fact that all battles of the Peninsular War are shown, Spanish as well as those in which Wellington fought. This is a most unusual, and very welcome, addition to my reference library.

I do wish that I had this wonderful book when I visited the Spanish and Portuguese battlefields about ten years ago. At that time I did not attempt to explore any of the Spanish battles, because I could not find any suitable maps to help me walk the ground. But with this addition I am really tempted to explore them now.

I have not yet had time to read much of the book. It is not really bedtime reading material. The book is heavy to hold, the writing quite small and the detail quite dry. But I have read the introduction and found the style to be easy to read and understand, despite frequent interruptions from the grandchildren!

If you have not already got your copy, and are wondering whether it is worth buying another book on the Peninsular War, don’t delay – buy it today. You will not be disappointed.

Just a few more days of snow and ice, then it will be back to sunny Spain. Goodbye to walking the grandchildren down to the frozen local park to feed the ducks, back to walking and wargaming. Of course we will miss the family, but it will be good to be back in our much-loved routine.

Wishing you and yours all the very best for 2011

Paul and Jan
Posted by thistlebarrow at 14:01