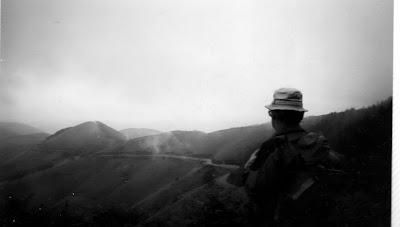 The last walk of our holiday was a return visit to the Maya Pass. We had put this one off twice during the previous week, waiting for better weather. It did not arrive, so we went anyway. It was cloudy and overcast as we arrived, and it got worse. We spent a couple of hours walking the area, but then the light rain turn heavy, and we were forced to abandon the visit.

During this two week holiday we had lived in a gite in the French village of Sare, right in the centre of the area of The Battle of the Nivelle. We had walked the ground of the light division attack on The Rhune Mountain, the twin battlefields of Maya and Roncesvalles and the epic battle of Orthez. Unlike earlier visits, when we were on a tight schedule and could only allow a short time for each battlefield, we had as much time as we wanted to wander and explore.

The weather had been less than perfect throughout our two week stay in Sare. We had a few good days, but more often than not it was grey skies and light rain. Not what I was expecting in the south of France in July.

We do a lot of hill walking in the UK. We have walked in Scotland, Wales and the Lake District. So we are not strangers to exploring the great outdoors in dismal weather. So it would not be true to say that the weather had spoiled our holiday, though it had made it more challenging.

This was our last visit to Portugal and Spain, or so we thought. We had spent four holidays walking Wellington's Battlefields in the Peninsula, and felt we had done the job quite well. We had never been to Spain on a "normal" holiday, and when we left Sare on 5 July 1996 we quite expected it would be the last time we would see it. Little did we know that ten years later we would be living here as residents.

The next battlefield to be walked will be Austerlitz.
Posted by thistlebarrow at 22:17