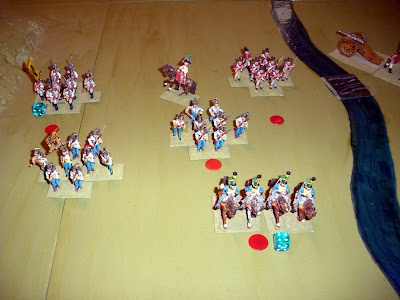 However lately I seem to have had more than my fair share of those you lose.

We have just finished a hard fought game this afternoon, and Jan won once again. This makes three out of the last four games. Worse still, she routed not only my cavalry, but also all of the infantry. The gunners only survived because they were on the far side of the river and too far away to have to test morale for any of the other routs.

For the first eight game moves all had gone quite well for me. I had to attack with a Poor commander, which means less command points to move the six fighting elements. Worse I had to cross a river which was defended by equal numbers of the enemy. However there were two fords which infantry or cavalry could use, as well as the defended bridge.

It started well with my cavalry racing for the ford and crossing before the enemy could react. It would take some time for the enemy to react, especially as half of their infantry were in the built up area. Despite my Poor commander, the command dice did quite well and I managed to get all of the infantry across the ford, and the artillery in place to support them.

Then came move nine. My cavalry were facing Jans cavalry, and my infantry could not advance until they were pushed back The artillery had fired twice, but only hit once. Her artillery had also hit my cavalry once. I changed my corps orders to attack, which allowed my cavalry to charge hers. With my rules cavalry melee can be risky unless one side has a distinct advantage, which I did not. In fact we were even in combat factors, so it would be down to the dice to decide who won.

With 2D6 I needed at least 6 to draw and 8 to win. I rolled 3. My cavalry routed, making supporting infantry within 4” test their morale. A roll of 3 and 2 left both Shaken.

At the end of move ten I had to test morale for the routed cavalry, they failed and continued the rout. One of the Shaken infantry was within 4” and had to test. A roll of 3 made them join the rout, forcing their neighbour to test. He rolled 2 and also routed, forcing his neighbour to test. A dice throw of 2 saw him routing. I was confident that my remaining grenadier brigade would stand, but a throw of 1 proved me wrong.

In the photo the corps commander is looking over his shoulder in disbelief as his entire corps, less the artillery, routs from the field. I know exactly how he feels!

You sometimes wonder whether you should look for another hobby.
Posted by thistlebarrow at 22:33