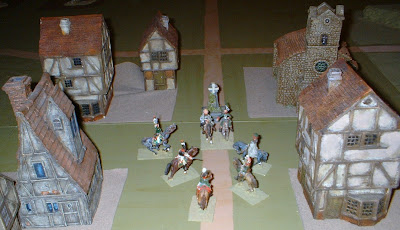 It has proved difficult to get back into our normal routine. This is largely due to the fact that our wargaming relies on the PBEM campaign, and despite my best efforts it has failed to produce a wargame since December.


We have had one move since Christmas, and that was delayed due to having to chase up orders from a couple of players. When I sent out the contact reports following that move, I asked that everyone respond as quickly as possible. However out of eight players only four replied, and I have had to chase them again. So I am wondering whether the PBEM campaign has lost its impetus.


I have found in the past when running a wargames club that long breaks can have a bad effect on concentration and interest. For example annual summer holidays often led to the loss of a player when we started again. I suppose the break in routine allows people to reassess what they want to do, and if they are not too keen they just find a new interest. Nothing at all wrong with that, providing they are honest and tell everyone concerned.


In a club setting if someone does not turn up for a couple of games nights you assume that they have lost interest. Its more difficult with a PBEM campaign. First there may be good reasons, other than loss of interest, for not replying. For example they may have lost their internet access. Whatever the reason, it is very frustrating, and very unfair on those players who have responded immediately.


Move 15 is 1600 to 2000 on 5 June, and night follows. So there will not be a battle until Move 16 at the earliest. So there is going to be at least another week or two before we get a wargame. By then we will not have gamed all month.


It has become clear that running the PBEM will not provide games in the same way that running a solo campaign did. Its a great shame, because I do like the imput from other players. Perhaps it was just too ambitious to have ten players involved.


I will keep this campaign going as long as there is sufficient interest, but I will then have to consider whether it is a good idea to start a new one, or return to my solo campaign.


Meanwhile I am planning to fight another of Wellington's Battles to keep us going until the campaign produces a battle.