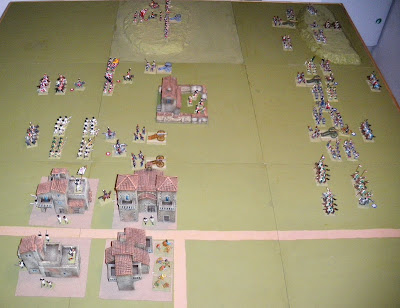 The problems with the PBEM campaign are still unresolved, which is the main reason I have not been posting on the blog. There are still three players who have not yet sent in their next movement orders, despite a reminder last week. So everything else has been on hold as I wait to see whether they will reply.
Its becoming apparent that I will have to bring the campaign to a close. This is a shame, not only for me but also for those players who have worked hard on the campaign. I do not want to just abandon the whole thing, as that would be very unfair. On the other hand it would also be very difficult for the remaining players to take on the commands of those who have either confirmed that they no longer want to play, or have simply not replied to my mails.
While I consider the best solution to the campaign, I have decided to set up another of the Wellington's Battles games. This is a game based on Talavera. Not by any means a refight, but a wargame based on the historical battle.
I do not try to recreate orders of battle or duplicate the actual scenery. I set up a table which as the major features of the historical battle, in this case Talavera, the Pajar, Medellin and Cascajal. The orders of battle are designed to give a good wargame, rather than to duplicate the historical one. This is a particularly difficult battle, as there were more Spanish than British troops present, but the Spanish did not contribute to the battle in at all. Recreating this as a wargame is a challenge.
I have just published part one of the wargame, which deals with the historical background and setting up the game. You can read about it here:
http://wellingtonsbattles.blogspot.com/
Posted by thistlebarrow at 21:31