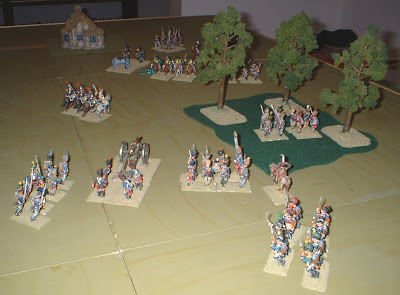 The French cuirassiers are about to win a cavalry melee, fail their morale and end up sitting in front the the Prussian guns. The impending French victory is about to suffer a serious reverse.


The battle of Seehausen seems to be lasting forever. This is the latest battle in our PBEM Magdeburg Campaign. Its already lasted 12 moves, which is quite unusual for one of our wargames. And its also proved to be a very enjoyable game. But it now looks like going into a second day!

Because Jan and I now wargame together and rarely have anyone else involved I have become used to doing what I want when I want with the campaign. It suits me fine, because as soon as I get a new idea for the rules, or the campaign itself, I can change it immediately. So I find it frustrating not to be able to do so with the PBEM campaign.

Its been a great learning experience, but I am anxious to start a new campaign and include all of the new ideas I have had. However I found when I was running a weekly group back in UK that players don't like too much change too quickly. I have already changed the rules for this campaign once, and I do not intend to do so again until we start the new campaign.

I had hoped that Seehausen would end in a dramatic victory for one side or the other, but it was not to be. At the end of the first day, 12 wargame moves, either side could still win. We have already had reinforcements during the first day, and that has helped to balance the odds even more. On the 12th move the advantage was swinging to the French, but an unsuccessful French cavalry charge which failed, and left the horsemen sitting in front of the Prussian guns, helped to redress the balance!

On the campaign map both sides have a corps ready to arrive at first light on the second day. The two players commanding those corps have not yet had a chance to test their commands in battle. They have done all of the map moves with the intention of doing so, and I feel it would be really unfair to stop the battle just as they are about to enter it.

I left it up to the two CinC players, and they both want to continue to a second day, so that decided the matter. And this decision will result in a dramatic end to the campaign. I don't want to anticipate what that will be, but I am pretty sure that Seehousen will be the end of the Magdeburg campaign.

You can follow the battle with a daily report move by move by clicking on PBEM 1813 Magdeburg campaign on the right.