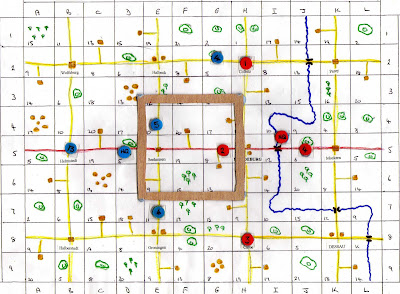 This is an example of my campaign maps. Not very pretty, but very practical and easy to make. Each square is one of my 2x2 foot scenic blocks for my wargames table. The idea is that I can easily transfer the campaign map to the wargames table, and back again. Also if one side is pushed back I remove the nearest squares on the table which are no longer in sue, and add the new ones from the campaign map. Each square on the map has a number, and that is the same as the appropriate scenic square.

Last week I received an email from Ron Marshal, who has created a computer map based on my humble efforts. And it looks great. He gave me a link to his website where I could see the map. Unfortunately my screen is smaller than his, and the grid part of the map was not where it should be. Ron did explain is his mail that it was designed for a larger screen.

Apparently Ron is designing a a similar map system to my hand drawn one, but computerised, and he asked if I would be interested. Needless to say I was much, much more than just interested.

For some time I have been looking at map making programmes for the computer, but nothing I saw would allow me to make the grid system and then put rivers, towns, hills, woods etc just where I wanted them. Or perhaps they would, but I could not understand how. Most seem to be designed to produce map like effects, but that was not what I was looking for. And I am not helped by the fact that I have the greatest possible trouble understanding new computer programmes. I always have problems on the few occasions when I buy a game. It takes me months to understand the basics. I think it may be an age thing.

Anyway I replied to Ron at once, but that was about a week ago. He did send a holding reply, but it apparently busy out earning a living!

I am not sure where it will all lead, but it would be very exciting if I could produce my a map of Europe similar to my strategic map, but with the ability to "zoom in" to something like my tactical map. I am sure that it would take a long time to produce, but I am very hopeful that it might be possible to make a start.

If I ever master the art of map making you will be the first to know.