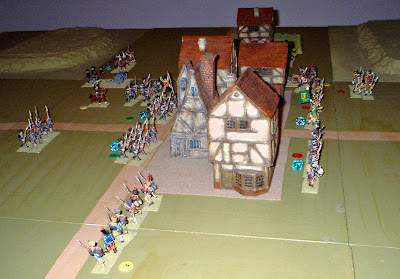 The latest battle report is of a game we played in November 2008.

It was part of a mini campaign set in 1813, as so many of our games have been over the past couple of years. Its a good period to wargame because so many nations were involved, and the fighting ability of each nation was very similar.

The French are marching on and as they reach the town of the Prussians are spotted approaching from Stendel.
The Prussians attack the town before the French can occupy it and prepare it for defence.
You will find the battle report and photographs by clicking on "Wargames in Spain" on the right.