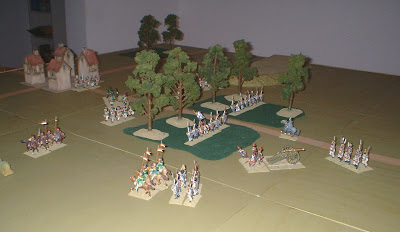 Lutzen is the scene of the fourth battle in the campaign. Napoleon has ordered the Westphalian corps to cross the river Saale and attack Lutzen. Unfortunately it results in yet another defeat for Napoleon. He must now decide whether to hold the west bank, or make another attempt to cross further south.

This was a really enjoyable wargame. Each game lasts 12 moves, and this one could have gone either way right to the end. Neither side made any silly mistakes, and both sides had good and bad luck with the dice. We usually only play for an hour or so each afternoon, so this game lasted a week.

You can read the battle report by clicking "1813 Halle Campaign" on the right.