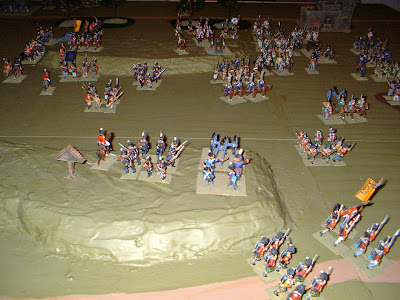 Having decided how to run the campaign, the next problem was how to organise the armies. The most important consideration was to use all of the model soldiers (see 25mm model soldiers) as often as possible. I also wanted to have evenly matched armies, but to have subtle difference between different nationalities. I wanted to avoid "super armies" (for example the British) who would be so strong that they would win all battles. Or alternatively such weak armies (for example Spanish) who would automatically lose every battle. There is not much fun commanding an army that is bound to lose.

I wanted each game to give all players an equal chance of winning. This might be achieved by allowing the weaker army to start in a strong defensive position, or it might mean three weak corps against two stronger ones. 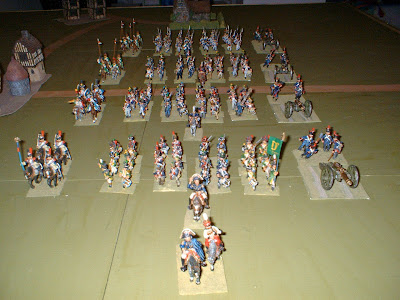 There are three grades of commander

Gifted
Average
Poor.
French armies tend to be have better commanders (1 Gifted, 4 Average, 1 Poor).
Russians are less talented (3 Average, 3 Poor).
The poor Spanish are the worse of all (1 Average, 4 Poor - no reserve).

Each ability is graded
A - best
B - average
C - poor

Each army has a general ability for their infantry. For example the French are average class, poor firepower and good skirmish ability. This does not mean that all of their infantry have A class skirmish, but they have a higher proportion than Russian infantry, who are only average at skirmishing. On the other hand the Russians have good class, and the French only average class.

Each of the four corps have different abilities, usually the first corps is the strongest, and the fourth the weakest. A corps which is strong in infantry, will often have weak cavalry or artillery.

Within the corps the first infantry brigade will usually be the best, the fourth brigade the weakest.