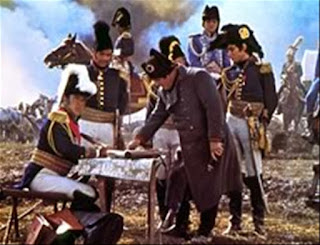 My 1813 campaign is designed to produce interesting battles to wargame.

My wife Jan and I wargame all of the battles, and have done so for many years.   I have written wargame rules which allow the type of fun games which we both enjoy.   They are not an attempt to recreate historical battles, and above all else each game must be enjoyable.   We both have a comprehensive knowledge of the rules, and what works and what does not.   We can also anticipate how the other will react in given circumstances.  So the only way to keep games fresh and challenging is to rely on the dice to achieve the unexpected.

I have recently reorganised my armies from four to six corps each.  This has increased the number of brigades in each army group, and has prompted me to rethink combat and morale.

In my rules infantry have three different abilities.   They are class, fire ability and skirmish ability.  Each are graded A, B and C.   A get plus one and C minus one.

Even I could not accept that the Spanish infantry should have such high performance.   They have 33 infantry brigades.   There are 18 B class and 15 C class brigades.   In addition they have 12 militia brigades, all are C class.   All skirmishers are C class.   So there are lots of infantry brigades, but they do not fight very well.   The end result should be that they do not do well in formal battles, but make up for it with their militia/guerrilla brigades disrupting the French lines of supply.

All of this works well in theory, but has yet to prove itself in practice.   The big problem will be the luck of the dice.   The Spanish can afford to be unlucky, they have to numbers to compensate.   But the results will be dramatic if the French have a run of bad dice.

I may well have to adjust the number of regular Spanish infantry.  But to do so will mean that they stand no chance at all in formal battles.   And, of course, wargames are always formal battles.

I may have to accept better class Spanish infantry, but then I would have to reduce their militia/guerrilla brigades.  And that is what gives our Spanish campaign such interesting problems for the French player.

It will be interesting to see how things work out.