Thoughts on the 1813 Campaign 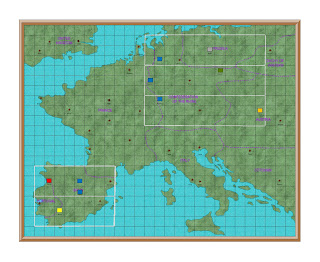 This was never intended to be such a long running campaign.   We have wargamed together for 50 years and have gone through all of the phases that everyone else has.   We started with one off games, each one bigger than the last as our collection of wargame figures grew.  Like most wargamers we wanted to be able to game Waterloo and Leipzig.   I remember the inspiration of seeing Peter Guilders WRG games in the pages of Wargames Illustrated in the 1970s, and then being able to take part in them some years later.

But the anticipation was always better than actually playing the wargame.   Even at the WRG I found the games disappointing, though the spectacle was inspiring.   Actually handling large number of figures over a huge wargames table can be tiring.   And playing against a lot of strangers who have different knowledge of the rules can be frustrating.

When I left the army in 1984 we were finally able to buy our own house, and at last we could have a permanent wargames table.   We were fortunate to have a large, stand-alone garage.   We converted it into a wargames room, and built a 12x6 foot table.   We then started a wargames group of 6-8 players who would meet once a week.   I provided the rules, figures, scenery and games.   So I could control the types of games we played.   It lasted until we moved to Spain in 2006.

All of this was a big learning experience.  I had experimented with various rules and different types and sizes of wargames.   I had a very clear idea of what type and sizes of wargames I wanted to play.   Retirement and moving to Spain would give me the opportunity to put it all into practice.

We decided that we would restrict our wargame to just the two of us.  A smaller 6x6 foot table would be ideal.   And I could downsize the number of figures due to the smaller table size.

The second decision was to concentrate on wargaming.   After 35 years of painting model soldiers I would put my brush and paint aside, and put all of that effort into gaming.

The final result of all this would be my 1813 campaign.    The aim was to use all of my figures and scenery in rotation.   So the campaign would be divided into five geographical regions, each with its own French and allied army.  A series of mini campaigns would be fought in each region, similar in size to the Waterloo campaign.   Each campaign phase would last about 10 campaign days and one or two months.

The original concept has not changed, but the mechanics of the campaign has developed and improved with each campaign phase.   The greatest influence was when I discovered Profantasy computer maps.  This allowed me to create a whole new series of maps, from each battle to the whole of Europe.

But the thing which keeps the interest alive is lessons learned from each and every campaign phase.   Things that go wrong provide me with projects to improve the whole concept. 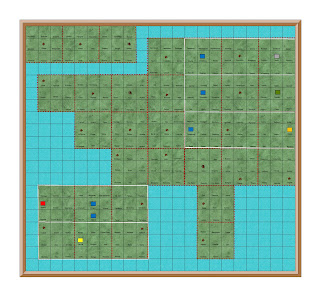 The latest was the concept of military regions rather than historical boundaries.  This allowed me to create a whole fictional European organisation.  It also kept me busy for many months making new maps.

My next project is increasing my ten armies from 4 corps to 6 corps each.   The Valladolid campaign was the first time that I have used this new army organisation and it has worked extremely well.   It provides me with larger and more challenging wargames.  It also adds a new structure to the organisation of each campaign phase.   I am very excited to see where it will lead.